We chatted to Bobby and Steve Clark in their apartment in Thornbury about how they met, their journey from Scotland to Melbourne and their complementary artwork but opposing creative processes. As charming, vivacious and extraordinarily talented artists, we loved learning they're finally able to give their art the time it deserves.

How did you two meet?

B: We met at fashion school studying textiles for fashion in Glasgow. I was running late on the first day and when I walked in there was one space left. This sweet girl said, come sit here and he (Steve) was on the other side and he leaned forward with his tan and this beautiful snake bracelet to say hi and I was like, ah I think I might go out with him. It took ages though, didn't it? (Bobby looks at Steve) S: Yeah, she came up to me at the lifts all giggling and that, and gave me this really random story. She was like, I know that you used to be a bricklayer and my cousin needs a bricklaying body double for this commercial she's shooting. B: My cousin is an art-director in TV and film and it was actually legit. S: And so I gave her my number but when she got back to me two days later, she told me the body double needed to be an old man. B: It's a true story! S: And so she asked if she could make it up to me and take me out for a drink. B: So I asked him out! S: And that was 10 years ago. (Smiles)

How long have you guys been in Melbourne then? 6 years. What brought you to Melbourne?

B: Well after Glasglow we went to art school together in Manchester and then we were deciding what to do next. I wasn't really ready to go and get a job yet as I wasn't sure what I wanted to do. S: Yeah, if you're in the arts in Britain you pretty much have to move to London but it's a vacuum. Unless you've got money, it's such a dogfight trying to make something out of your design or art. So at the time I had an injury and was going to a physio who had been over in Australia working with this soccer team and this opportunity came up to go, so we went. We came over here for a year and thought, let's do another and realized pretty quickly that we needed to figure out a way to stay here longer. So I went back into the construction industry to work and get our visa, which is why it's taken so long to get back into my sculpture work.

How did you get started in your art practice?

S: Straight of Uni it was all based around concrete, so mixing different aggregates with cement. I've been a stone mason since I was 16, so I felt using stone would be too obvious and needed to go the long way around. It's kind of funny that I've ended up back there. But I recall working with limestone on a job down in Portsea and I liked working with the material, even though it was in a construction capacity. It's so malleable so I knew then that it was something of interest, and I had ideas in my mind about how I could explore it in a sculptural way but it wasn't the right time. I can't recall exactly what happened, I think someone asked me to do a commission and then it was natural progression from there. B: I've fought being an artist for so long, I always wanted to be one when I was a wee girl but when you say you want to be an artist everyone is like no, you can't do that, no one gets to be an artist. So I put it away, but then when I started at Pop & Scott I began drawing shapes and being a bit involved in the pot design. Poppy (owner of Pop & Scott) started doing some event design too and we ended up designing this Mexican bar and she gave me free rein with it, and I was like I need to start painting again. So I just went back to square one and started colouring shapes and then someone wanted to buy one and I was like, what? People want to buy them? So I guess it naturally happened. I'm just so peaceful when I paint and I feel I need to do it on a mental level. 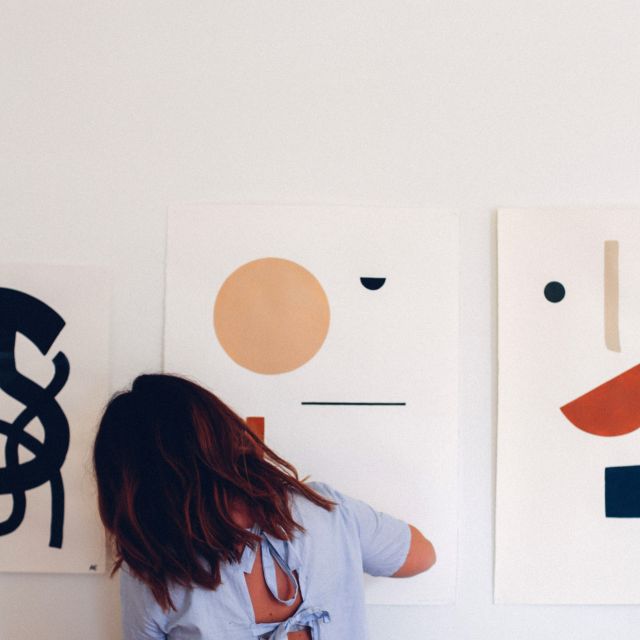 How would you describe each other's art practice?

B: We're completely different. Aren't we? S: Actually, we're really the same. It's all shapes and form. B: Yeah I suppose, actually our work is quite similar and it works together. S: If you were to break down our art into simple, 2D shapes you'd see the same type of thing. B: See I was talking about the process. S: Oh, right. B: We've shared a studio before and that didn't go well. Steve is about energetic chaos, that's where he gets his inspiration, whereas I'm clinical and clean. I guess I have to be, paper is so unforgiving you get a mark on it and it's done. But yeah, I guess our works are really similar.

Steve is about energetic chaos, that's where he gets his inspiration, whereas I'm clinical and clean.

Can you tell us more about your creative process, from idea to final result?

B: I always start the same; I need a clean space and all my brushes to be clean. I choose my colours first and then build up. It's the same every time, I even listen to the same music. I've got a playlist, it's classical and orchestral. Ludovico Einaudi is my favourite. It's quite emotional music. That's all I can paint to. And do you think there's a relationship with the music and your art? B: Yes, I'm drawn to songs that take you on a journey, that take me to a different headspace. It's like classical music puts you on another level, it's spiritual in a way.

And your creative process Steven?

S: I've started to better understand my creative process for commissions, but it has taken time. For example I can't just get someone to send me an email. I need talk to the person on the phone a few times to build up an understanding of who they are. I ask a lot of questions, like where the piece is going to sit within a room. I also need pictures and references of things they like. It won't mean I'd produce anything like that but I need to build a story in my head so I feel like I'm giving them something they're going to value. If I'm doing it for myself though, I can make it easily. For me, my music is more about tone and energy. I guess my process is driven by energy, and being free with what happens, allowing myself to make mistakes and responding to that. I might have an idea of the shape or form in my head but I can't allow myself to get bogged down trying to be exact. 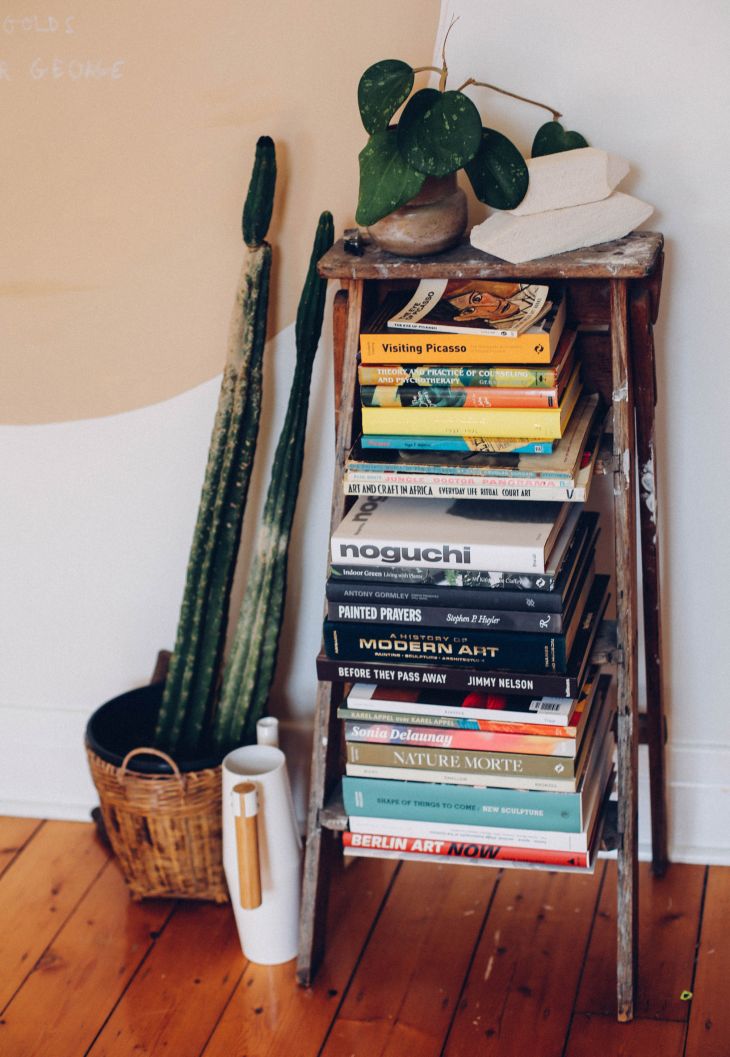 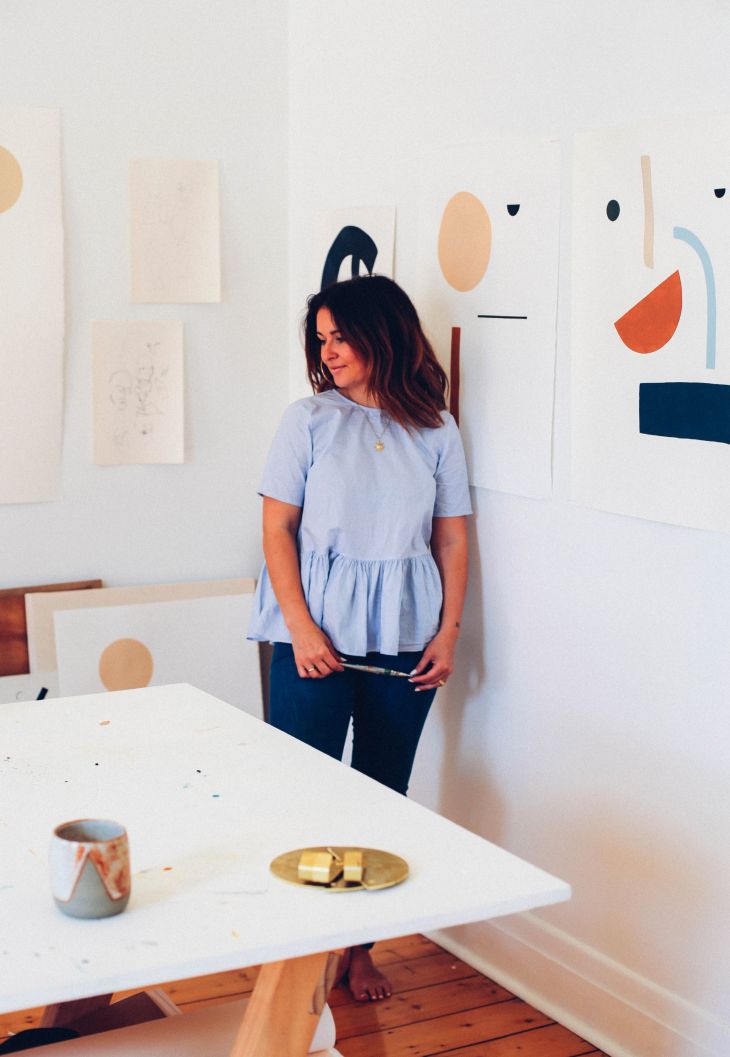 It seems your art comes from within, but do you look outside to any places for inspiration?

B: I always turn to books and magazines, and beautiful architecture rather than turning to other artists -- I feel I need to stay away from what's happening currently and look more past practice, otherwise you can end up with a warped result. S: It's a melting pot of everything visually I've taken in everyday. If you're thinking about your practice all the time, then you're always going to be taking in ideas and shapes -- I'm a sponge for everything that's going on around me.

Both of your work deals with shape and form, how do you think that's come through in your home environment?

B: It's funny because he hates this house. S: Mine has come from looking at Bobby's artwork. There's certain shapes in Bobby's work that's come from seeing and being around it here, that I'll see in my work. I imagine it'll probably be vice versa? B: Definitely. But I think we'll be happiest when we build our own home. You know? Actually building the walls. We need a home with a garden. Plus, I want chickens. 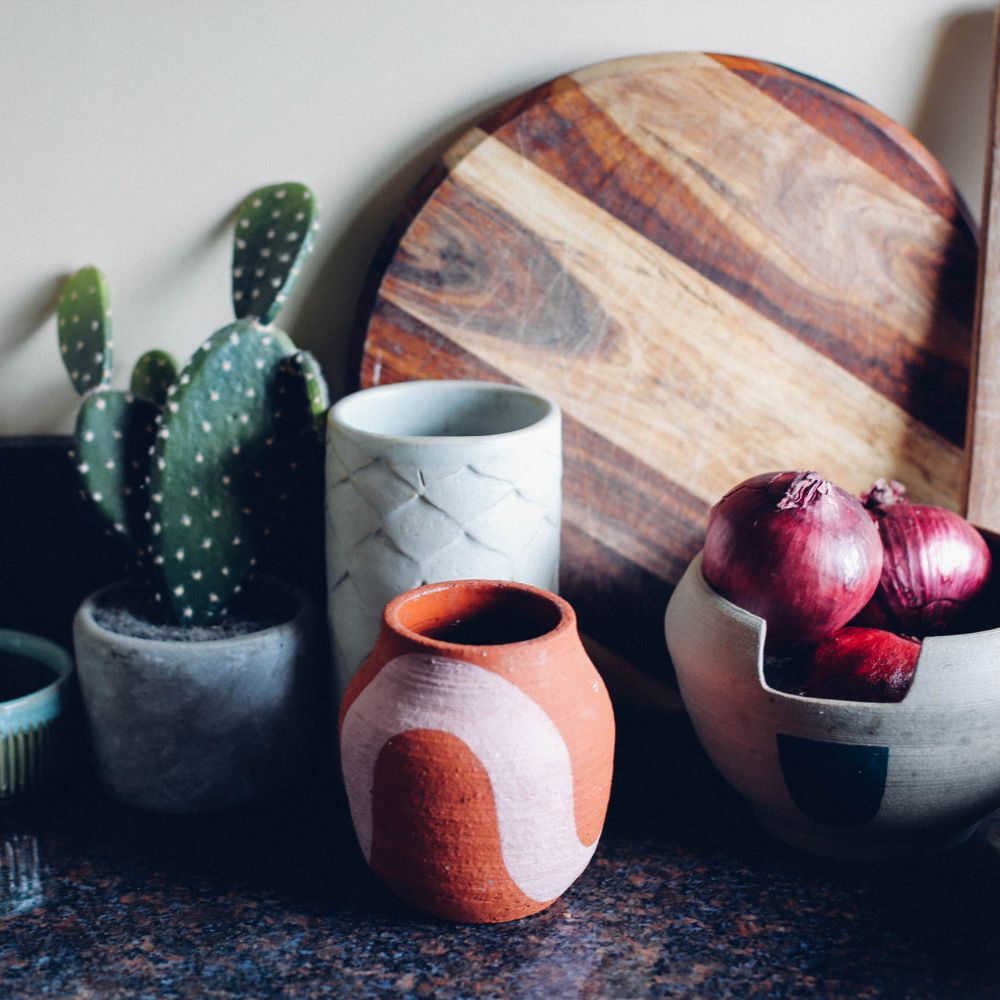 What would make a home, home for you guys?

B: He hates it but I find stuff and I latch onto things. I found that couch for $60. How could I not buy it? I love collecting items with stories, and I hold sentimental value to things. S: My head's messy enough, so I don't like things around. I'm always taking things out.

Day to day, do you guys have a routine?

B: Every day is really different for me. I try to keep a routine and love my studio, but I find it difficult working from home. I'm an early riser though, I prefer seeing the sunrise so I feel like I've got my days worth. I'll always get my morning coffee, there are so many good local places and then when I come home, I'm ready to go. When I'm shooting it could be a wedding, or a florist - being around people is great for me. It works better that my days are not structured, I would get bored doing the same thing over and over again. But if I don't have time to paint, I do get stressed so I have to make time for that. S: Mine is pretty much get out of the house as quick as possible, get a coffee on the way to the studio and get started. If I'm not in the studio as soon as possible, I get really agitated.

Do you have any before bed rituals?

B: Steve's a funny bugger and doesn't like to be in the house at particular times. S: I can't be in the house from 6pm until 8pm. B: I come home exhausted and he's like, we're going out. We'll go for dinner, to the cinemas or Readings on Lygon St. S: We've been watching some good TV series recently but there's one rule, you have to get into bed at the same time. Bobby will go to sleep next to me. B: If I do go to bed, I can't sleep if he's not in the room -- it's really annoying.

B: Scout, our dog! She goes everywhere with us. S: My Nutri-bullet. B: Oils, books, and photographs! I have some photos of my family that go everywhere with me. S: Tuna. B: He could NOT live without tuna. S: Toothbrush. B: You're terrible. I don't think you've got one sentimental belonging. S: It's all in here (my mind).

Amanda Callan and Andrew Morris live with their two curly haired boys in Billinudgel in the Northern Rivers region of New South Wales.

Not IN BED: Lisbon

Words & Images by Sophia McComas Sprawling over the banks of the Tagus river, Lisbon oozes a beauty you have to clap your eyes on in the flesh ...