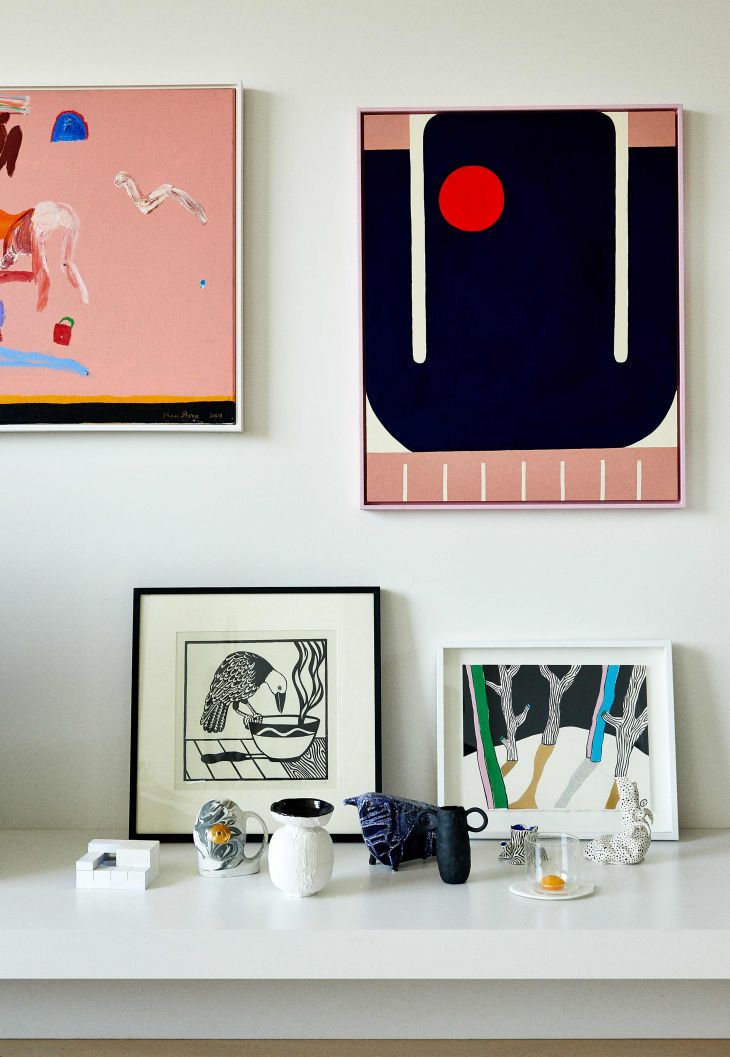 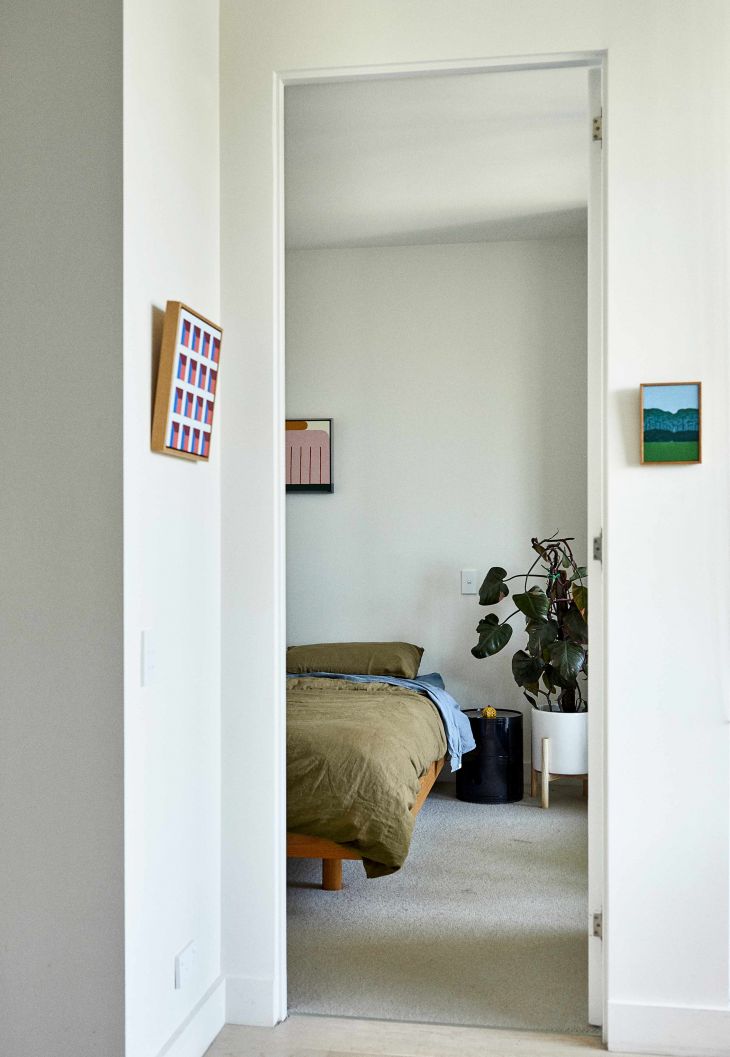 Evi is a Sydney-based artist and designer. Her much-loved, prolific design studio works on publication and branding projects (they seem to be designing every good book cover coming out of Australia at the moment) from cookbooks to art books, travel guides and non-fiction. When she's not designing clever book covers, Evi paints, and some of her small-scale works can be spied hanging around the walls of her own home. 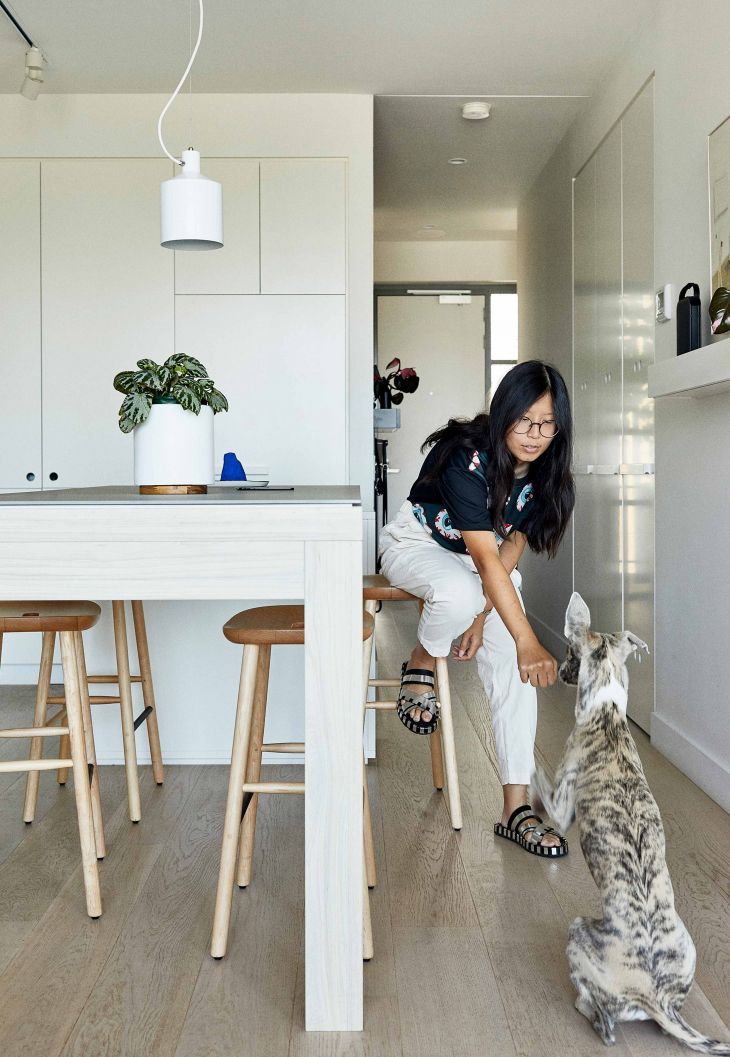 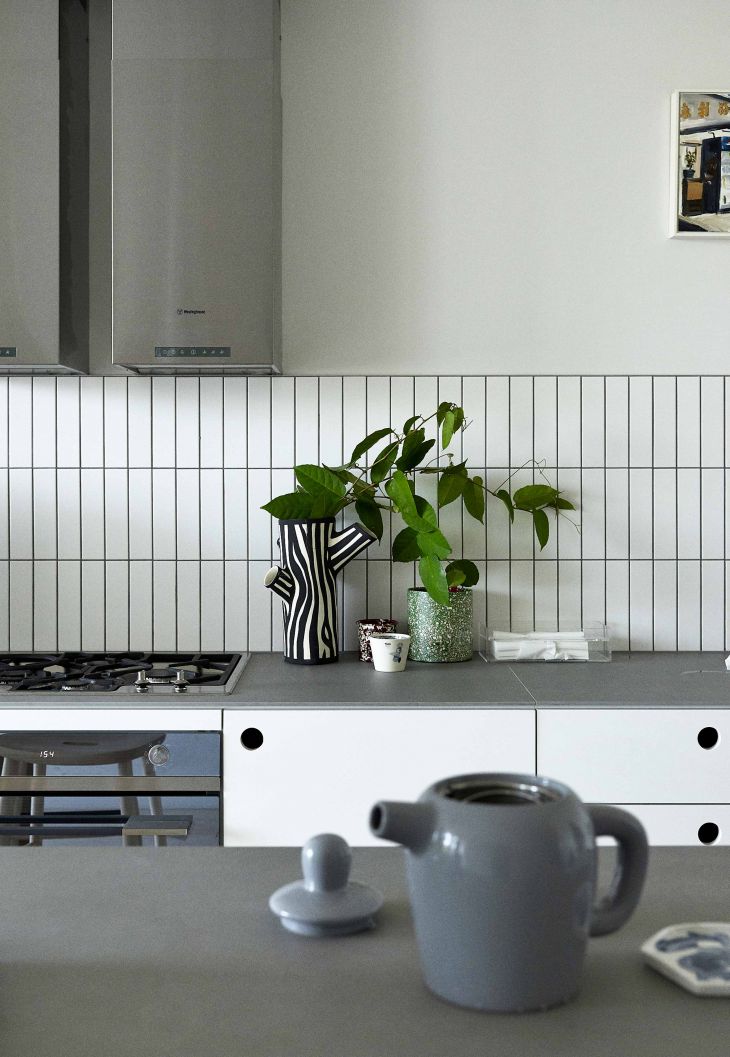 Evi's apartment in Waterloo is small and functional, designed to accommodate greenery and practical inner city living. Best of all, for Evi and her partner Sonny, it's close to the dog park for their whippet-child, Henri. "It is a newly built apartment with an unusual design that promotes living surrounded by plants. The corridors are open air, and each apartment comes with grids for climbers, making apartment living feel more natural. The clever Hecker Guthrie worked on the interior, designing it so you only need to bring in a minimal amount of furniture. We pretty much moved into the apartment with a sofa and a bed."

It is a newly built apartment with an unusual design that promotes living surrounded by greenery. The corridors are open air, and each apartment comes with grids for climbers, making apartment living feel more natural. 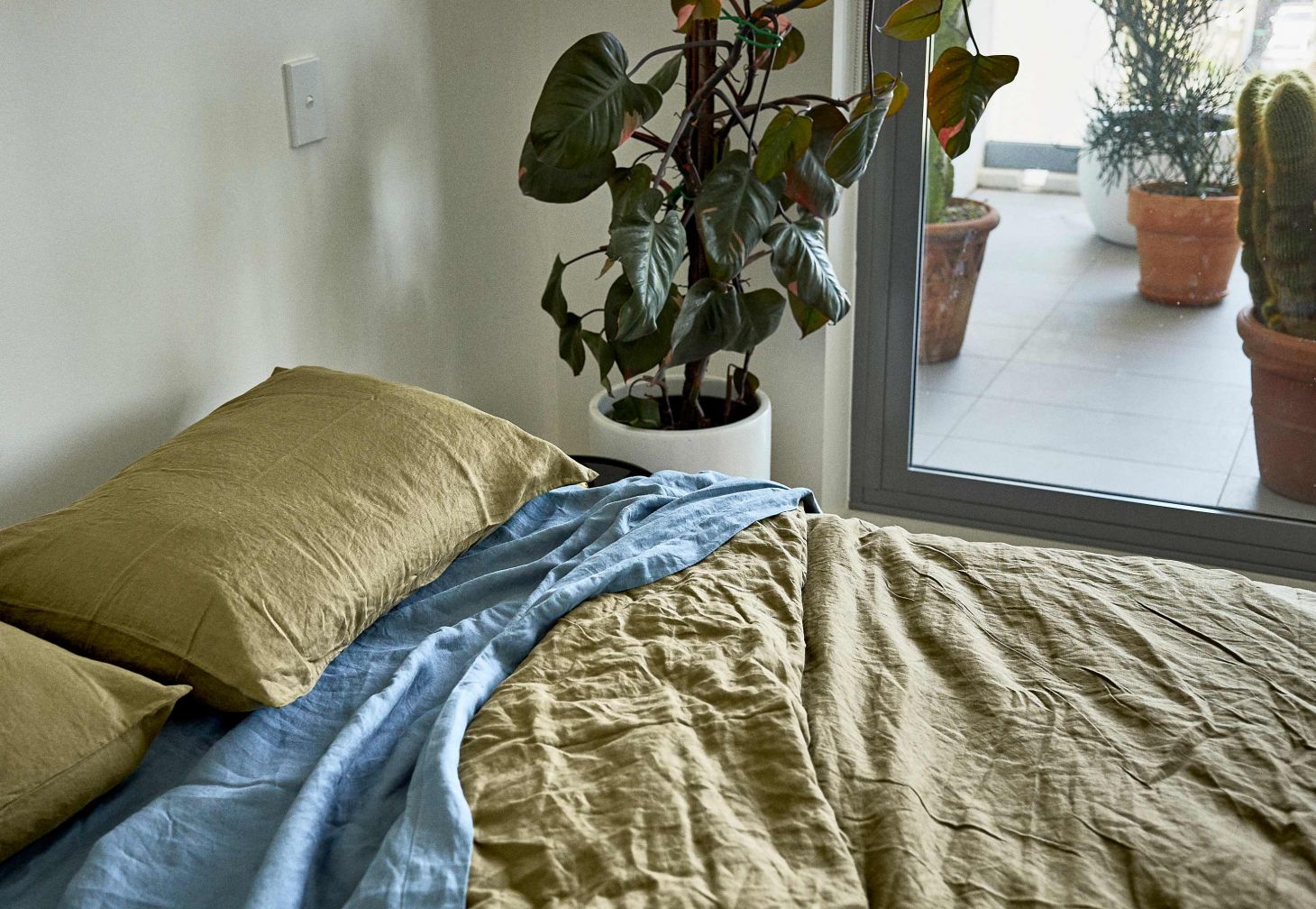 Evi and Sonny's home is peppered with plants and objects made by friends."Some favourites include my giant monstera Young Don Draper (guess where Old Don is?), a sexy boob-shaped vessel with a gold nipple by my friend, ceramicist Milly Dent, and a one of a kind Egg vase found in Chinatown, gifted by my florist and calligrapher friend Grace Morley." 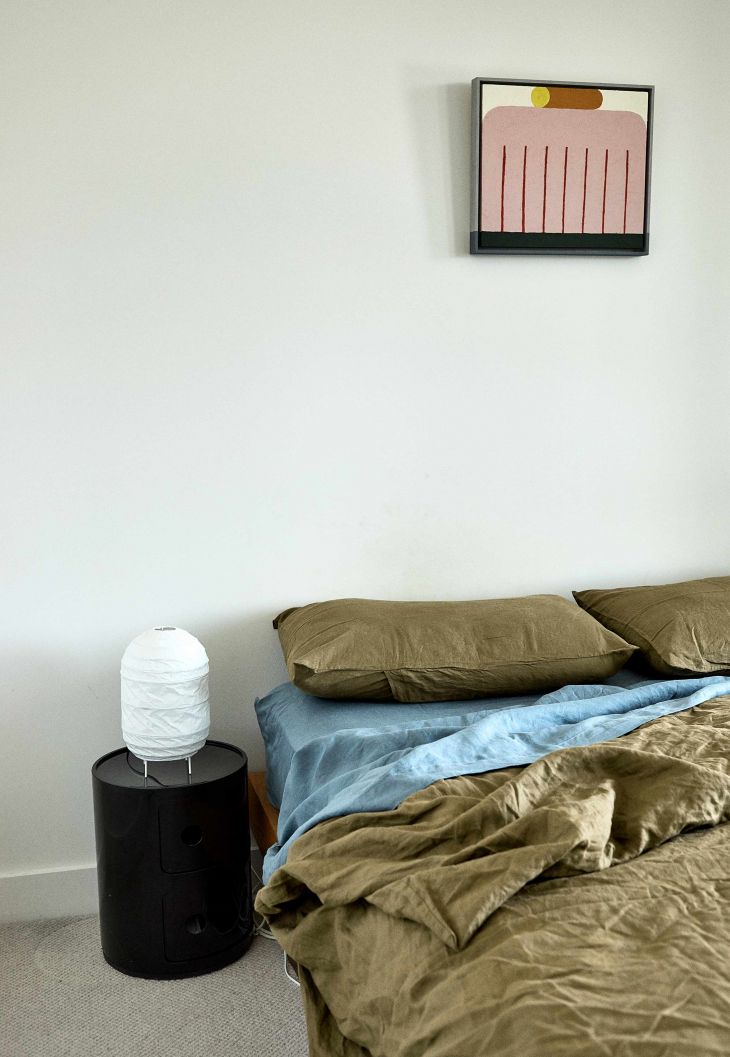 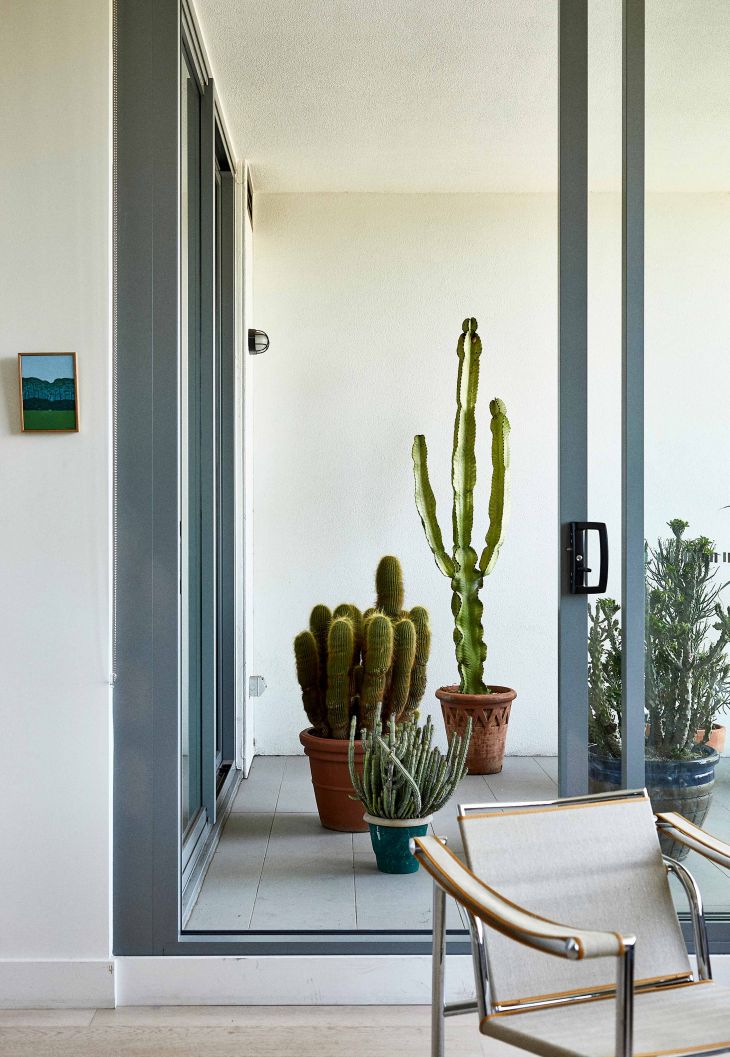 Evi's bedroom, with one of her artworks hanging above the bed and "cactus courtyard" - to which they are slowly adding new species.

Sharing her favourite local spots, Evi tells us "In our neighbourhood I love the guys and gals at Baby Coffee Co, just downstairs. They feed me well! I think my local, Sydney Art Store is the best in town, I go there for my supplies. Alexandria Park is a must for Henri, and often I venture a bit further to Redfern St for Japanese Food from Tany's." 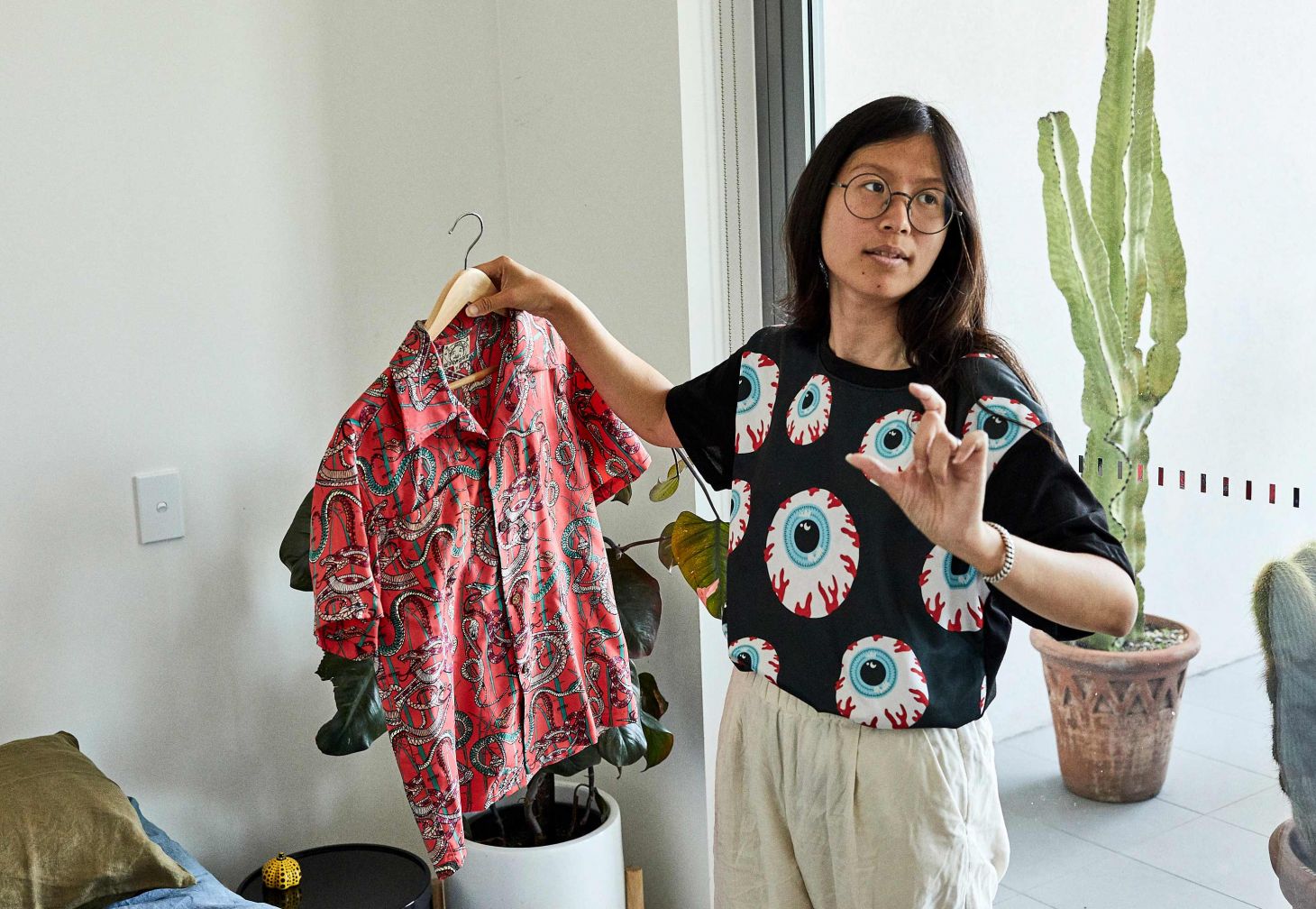 "It was during our second Japan trip and we were hunting treasures, mainly for my man, Sonny. I was checking out the silk shirt department of a store when I spotted this amazing snake shirt. I asked Sonny to give it a go and he just wouldn't. I asked for the smallest mens size possible and got it for myself. I think someone is a bit jealous these days!" 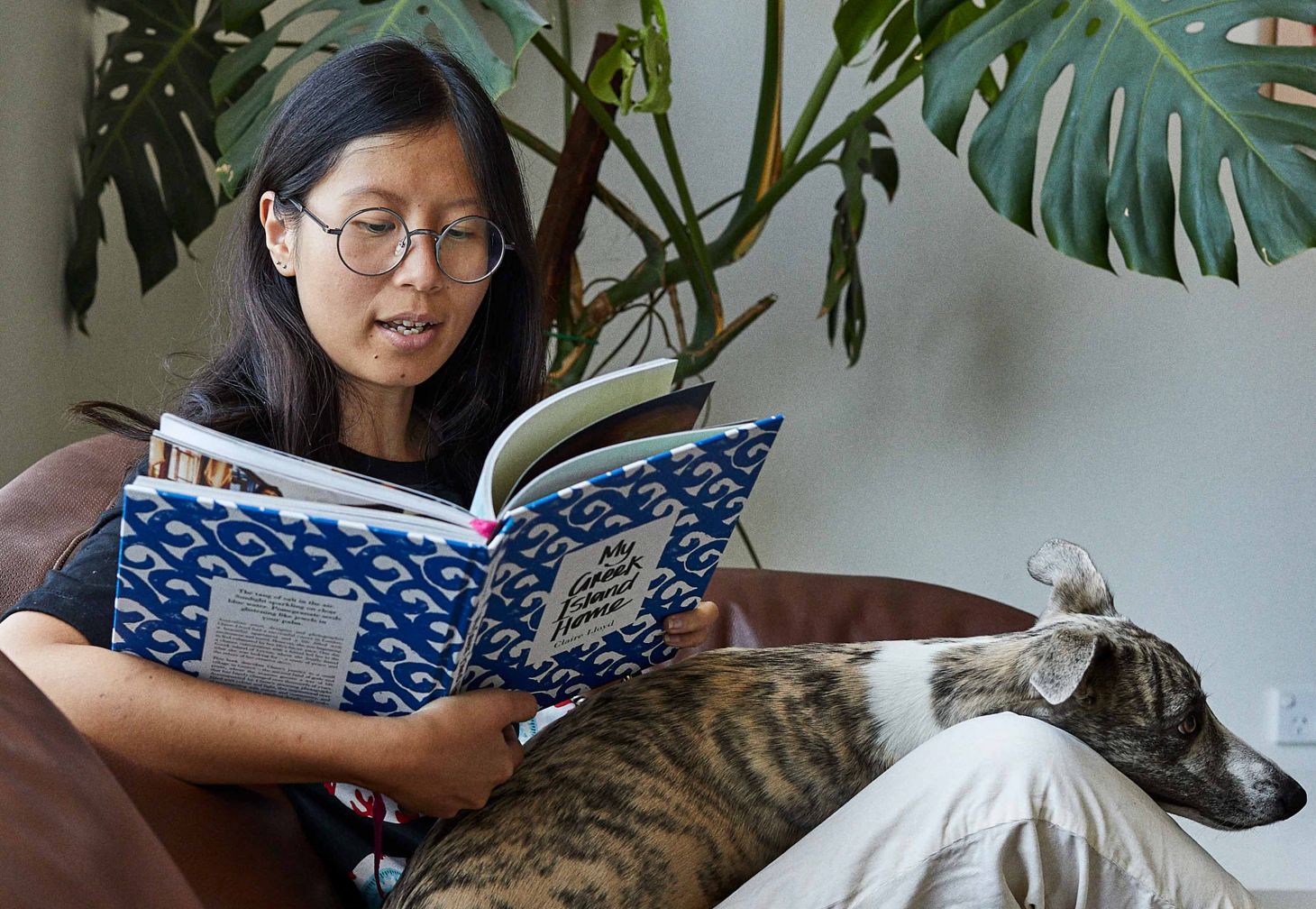 Evi shows us one of the first books she worked on, when she was working for Penguin Books. The author, Claire Lloyd, is now a very good friend. The book documents life in the Greek Island where Claire lives. "It is still one of my all-time favourites, because of the collaborative process and a cracking cover we managed to end up with. It's a pattern print of a linocut panel I did, depicting the beautiful ocean waves that lap the island."

It is still one of my all-time favourites, because of the collaborative process and a cracking cover we managed to end up with. It's a pattern print of a linocut panel I did, depicting the beautiful ocean waves that lap the island.

Evi and Sonny's dog Henri, known as "the smart and sensitive sook".

"I swear he can sense if I'm feeling blue, he will climb on my lap and snuggle. And everyone would agree he's a sook, especially if I leave him in the studio when I'm out in a meeting, you'll find his long face adorning the office armchair." @evi_o

Lori Stern is a chef, caterer and artist living in Southern California.