Ben Abiad and Adriana Ortato live a fairly quiet life in their brick cottage in Sydney's inner west. "Well, if it wasn't for the flight path," says Abiad. "It's not that great for the ambience." The couple shares the Marrickville home with their friends Blake and Laura. It has numerous garden plots for greens and herbs, fruit trees that are "great for marmalade," says Ortato, and a chicken coop that the couple built when they moved in eight months ago. "We call the chooks our Golden Girls," she says. "There's Dorothy, Rose, Sophia and the slutty one, Blanche. We're pretty sure she's the only one laying the eggs." 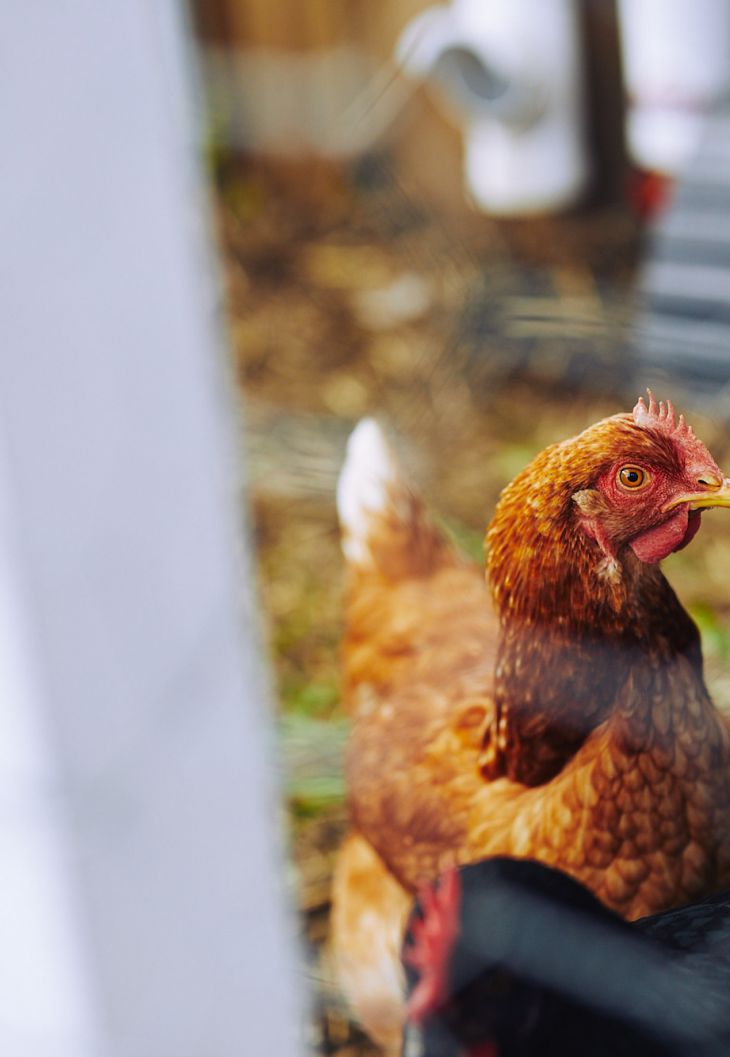 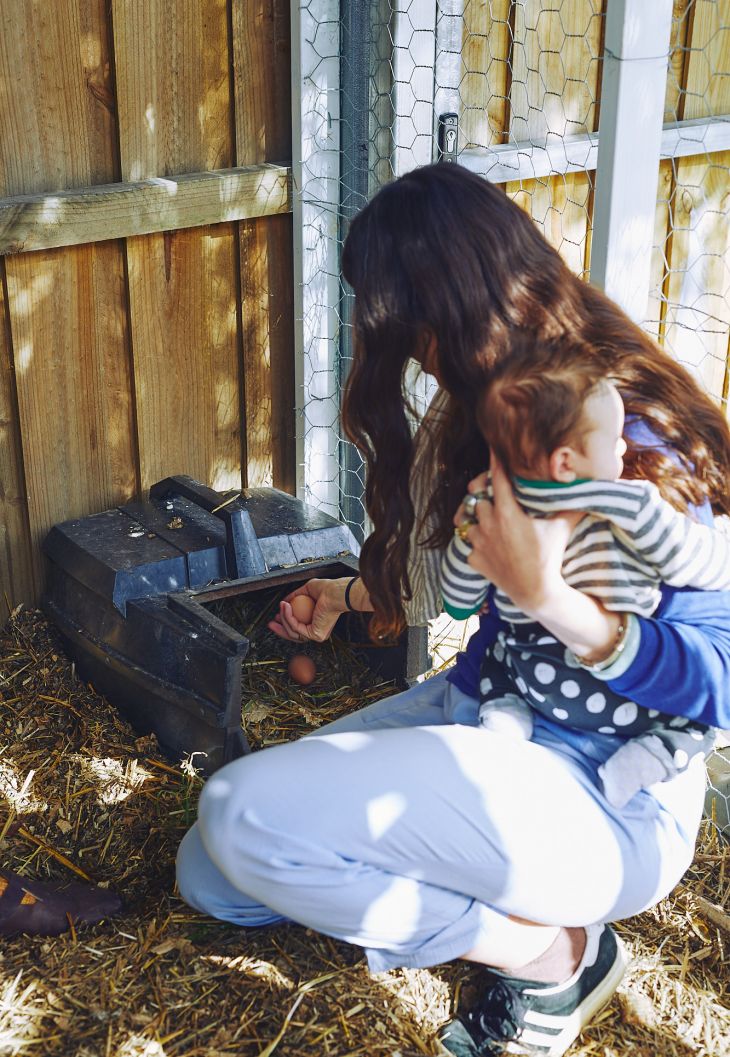 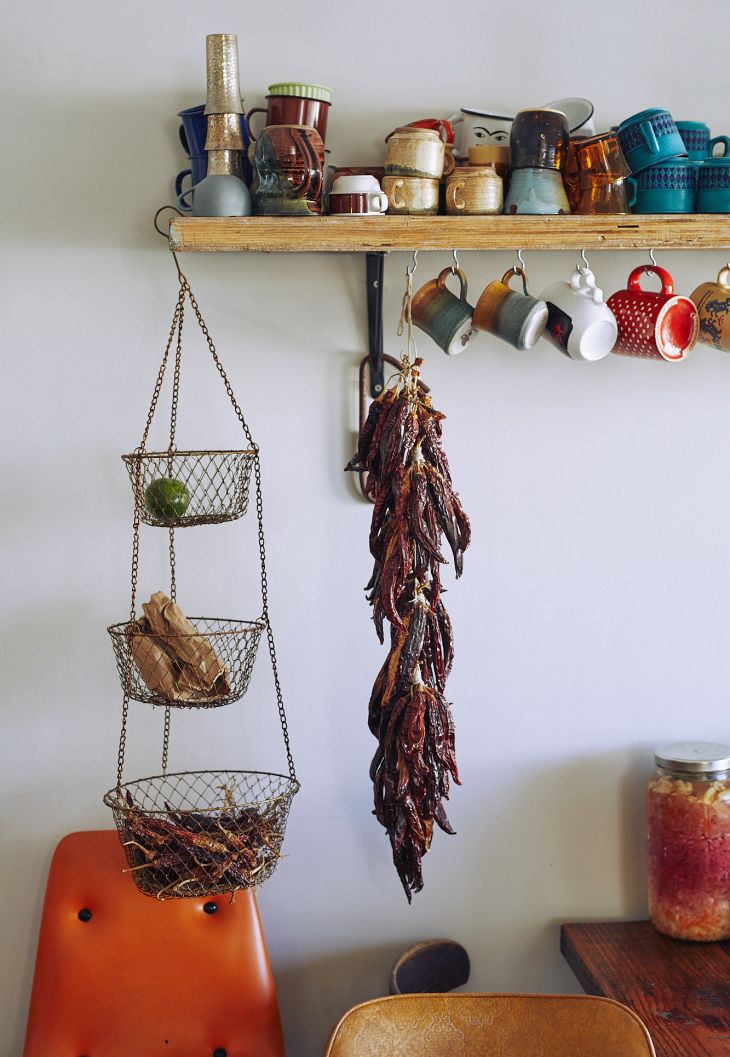 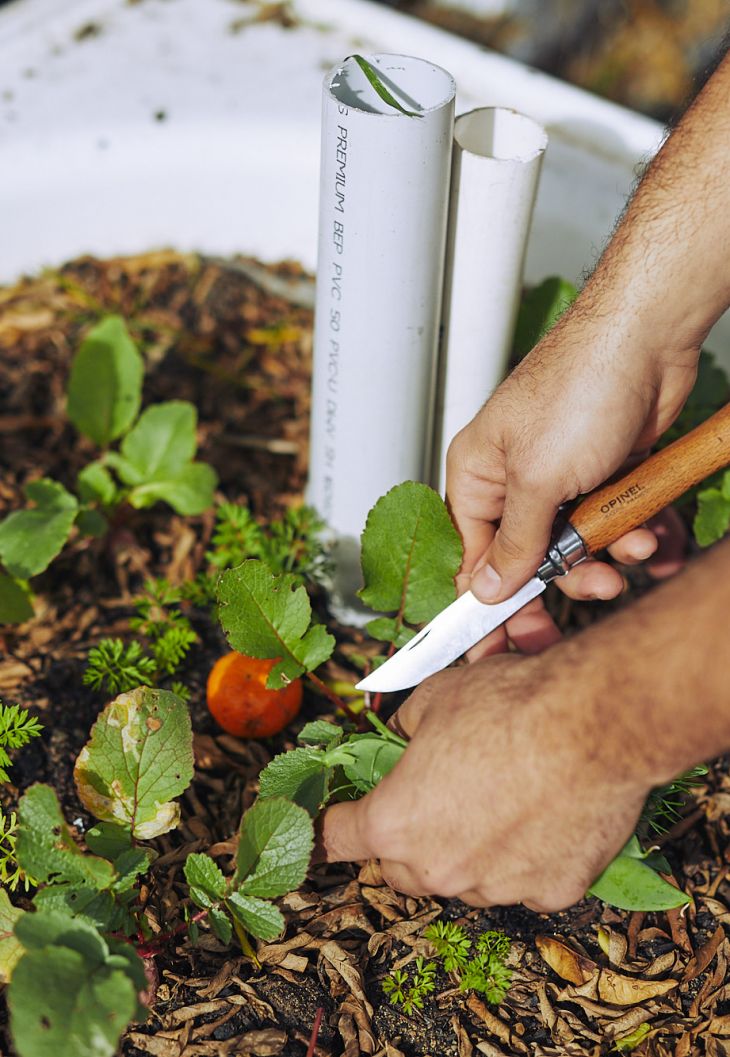 Abiad is a chef at Dear Sainte eloise, a wine bar and kitchen on Llankelly Place in Potts Point. Before that he opened Brickfields Bakery in Chippendale: it's where he met Ortato on the pickling station and the couple fell in love. She's a cook, too. Prior to having their son Yani Calypso in May, Ortato was behind the produce-first food at Mecca in Alexandria. It's as if everything in their kitchen and sunroom has been painted a jewel tone: mustard leather vintage chairs, burgundy and petrol-green cushions, burnt orange and yellow metal kitchenware and cobalt blue ceramics. Oil paintings and plants cover every inch of the sun-drenched space. 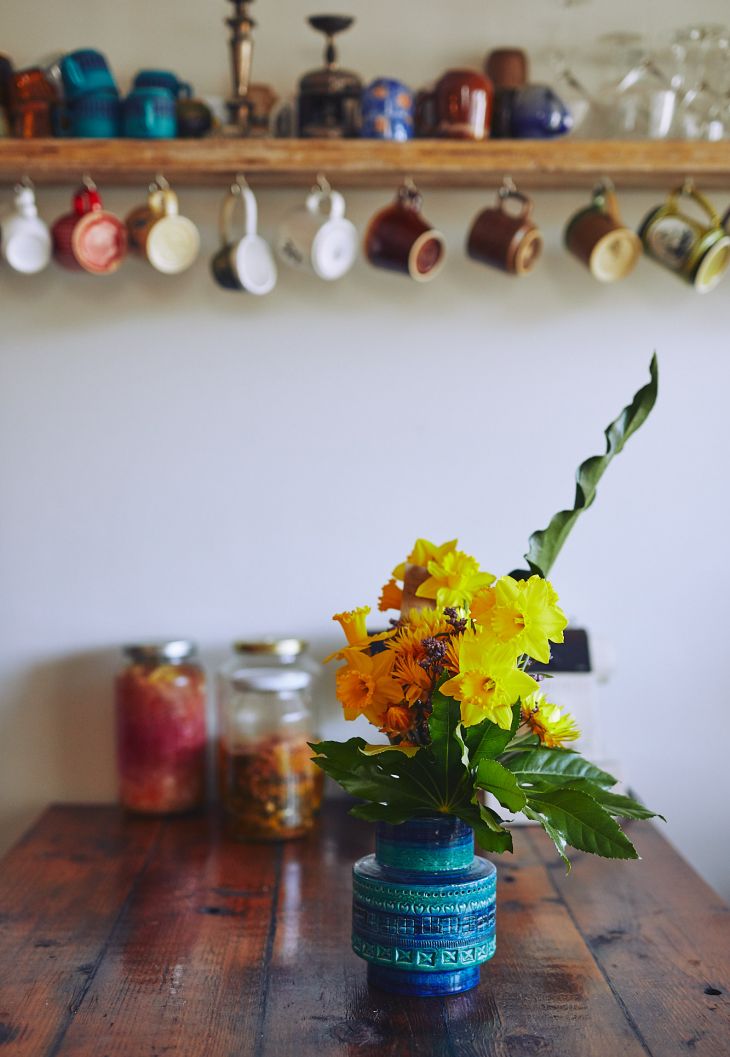 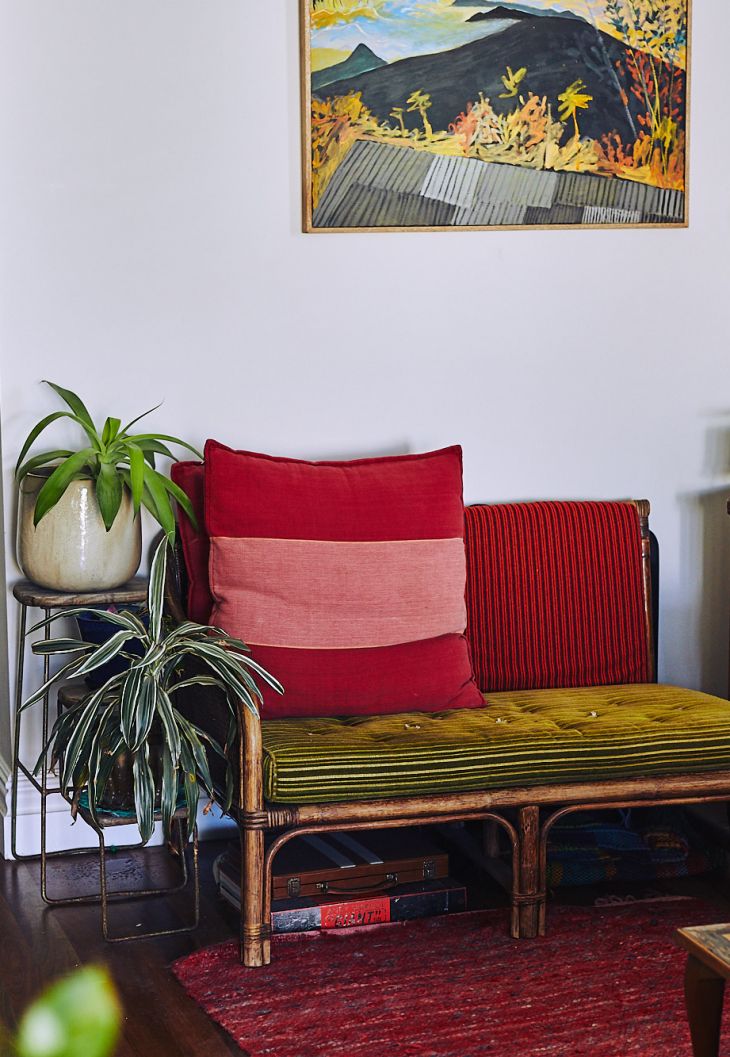 On this particular Saturday morning in Marrickville, a Count Bass D record is playing and there's a Persian love cake covered with marigold flowers on the table. "I love this dining room," says Abiad. "It's where the laughs happen." After they collect the eggs, and pick fennel fronds, rosemary flowers and other greens from the garden, he begins frying young garlic. 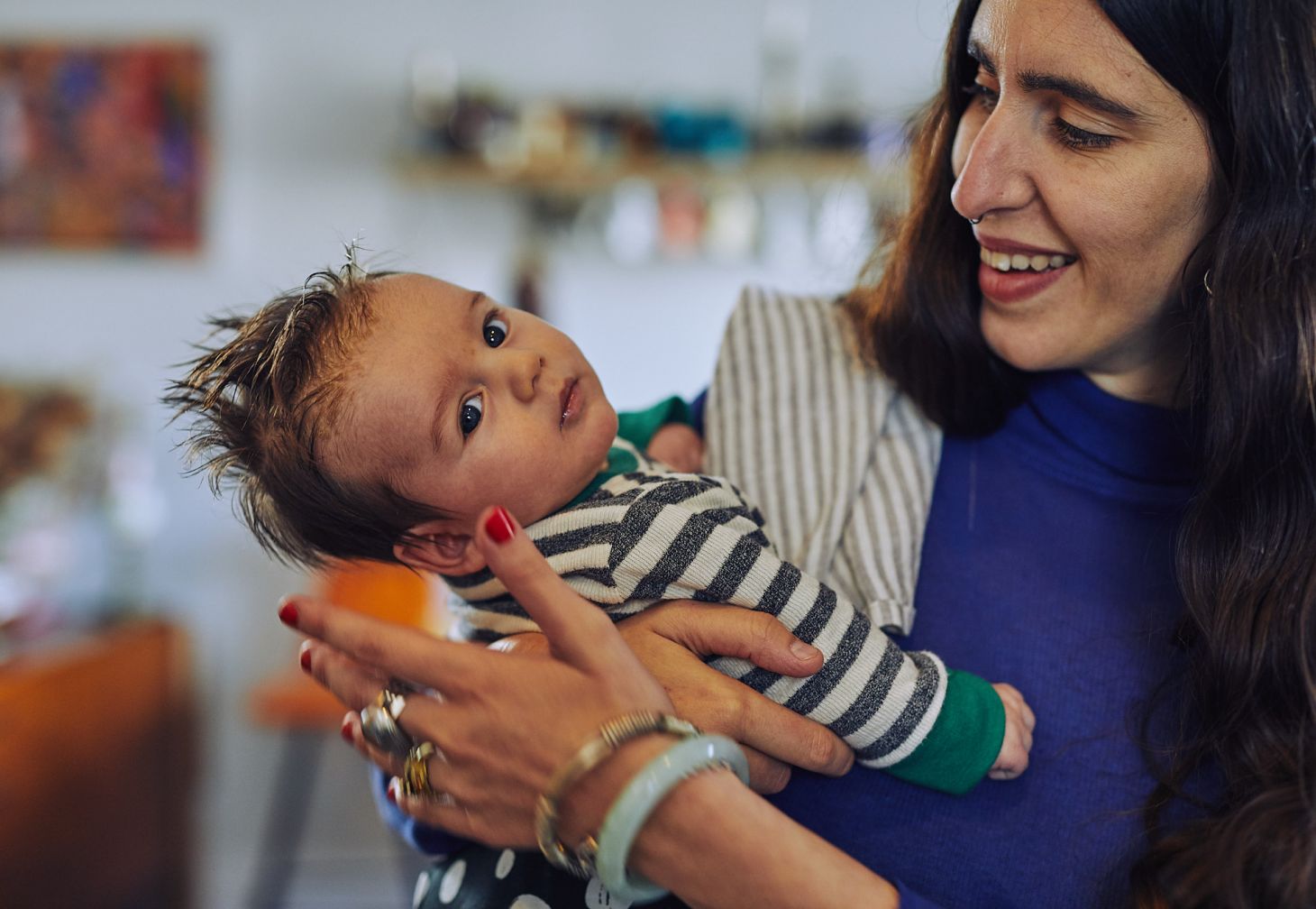 "This is something that I'm pretty sure came about from roast dinners," says Ortato. "Often we'll do a roast chicken and it's really nice to be able to turn the bones into a hearty broth." "It's real comfort food," adds Abiad. "We tend to change it up a lot, too. It's something you can make with whatever's in the fridge and whatever's in season. Here we're using cavolo nero and peas, but on another day it'll be something completely different. We used to do a version at Mecca with kale, sprouts, pickles, shaved fennel and a poached egg. You can add an egg at breakfast time, or if it's for dinner another couple of vegetables. It's such a versatile dish." 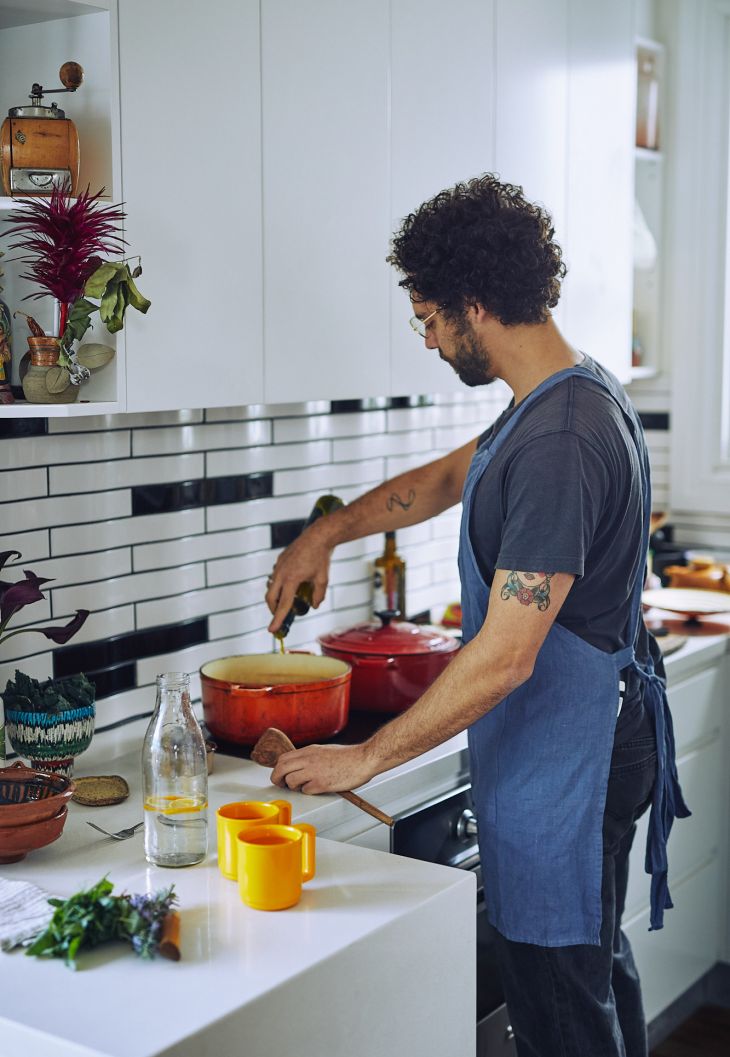 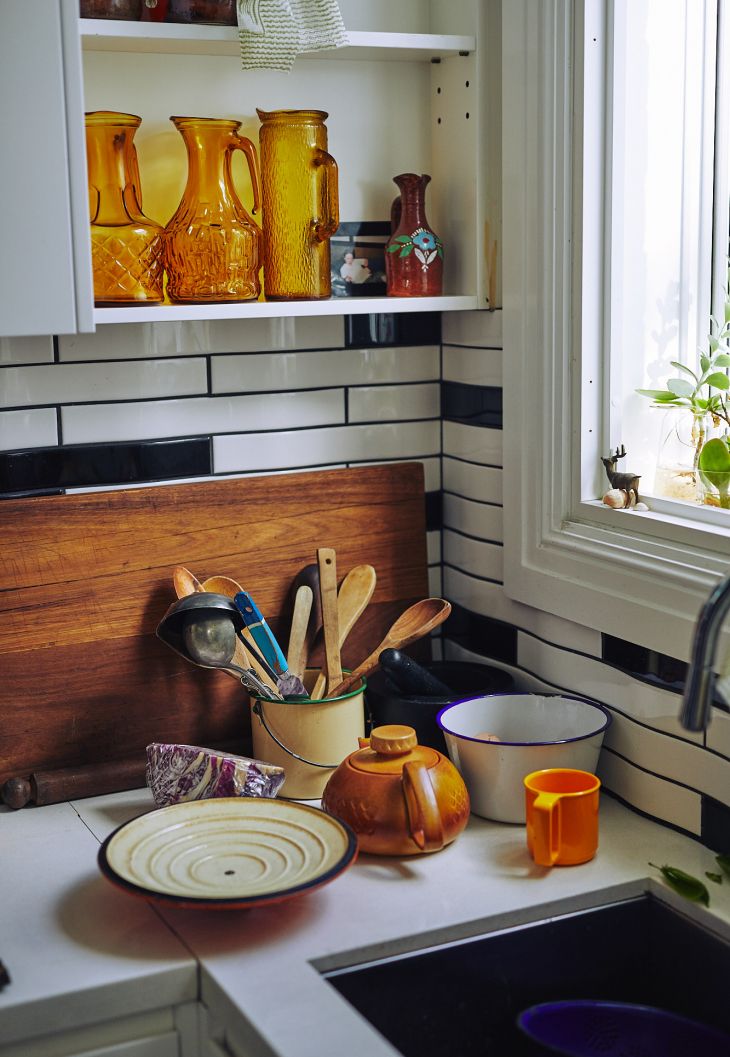 It's real comfort food," adds Abiad. "We tend to change it up a lot, too. It's something you can make with whatever's in the fridge and whatever's in season. 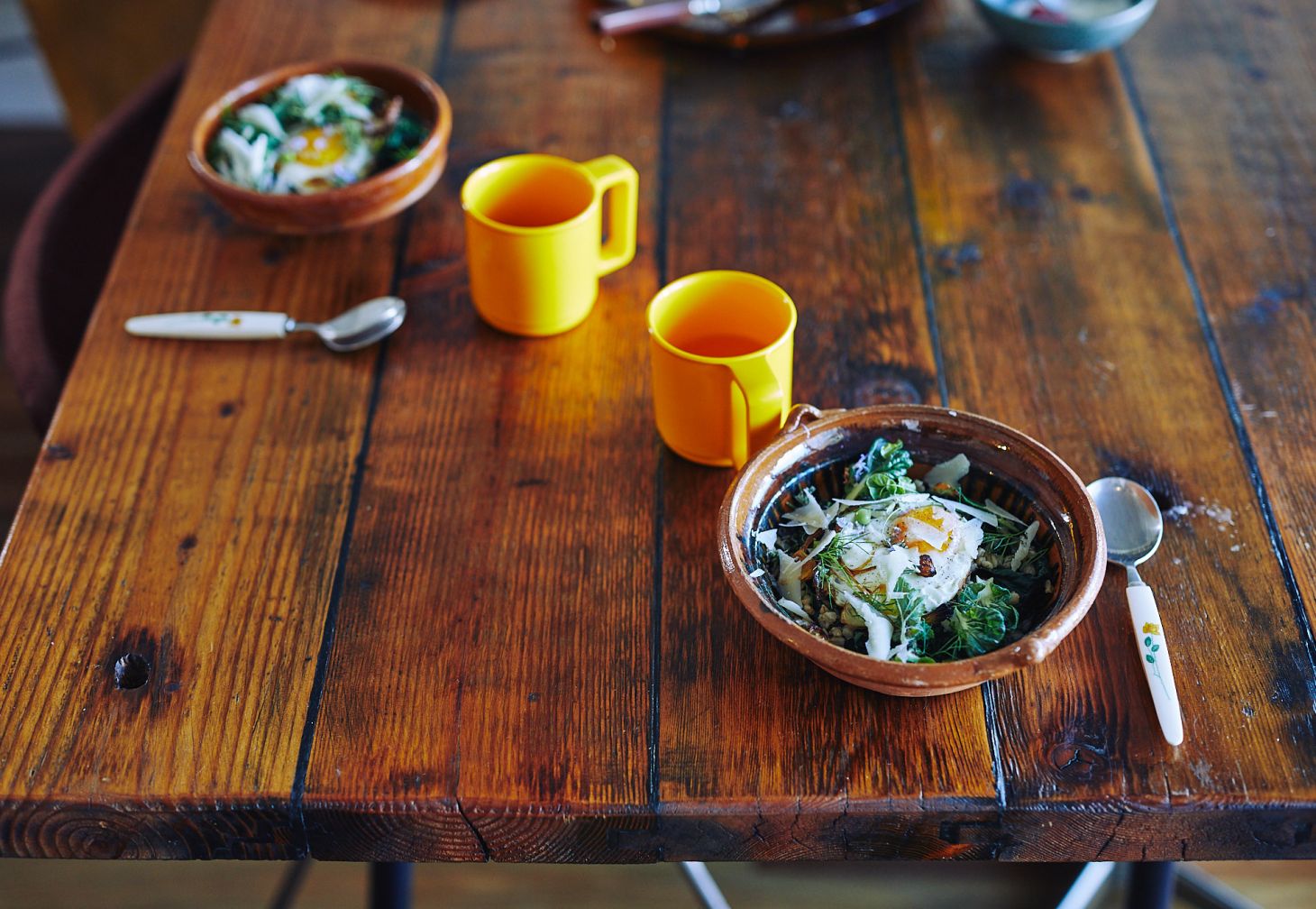 Chicken broth with greens and flowers

Make the broth a day ahead for maximum flavour and convenience.

Place the chicken carcass in a baking tray and dry roast the bones for approximately 45 minutes or until nicely browned.

Fill the pot with water until 3/4 full or until the ingredients are fully submerged.

Bring water to the boil, then drop it down to a simmer. Keep at a rolling simmer and skim occasionally until stock is well flavoured (at least 12 hours). Add more water as required.

Strain stock through a fine sieve into a container and refrigerate. Chicken stock will keep refrigerated for 3 days, or frozen for 3 months. 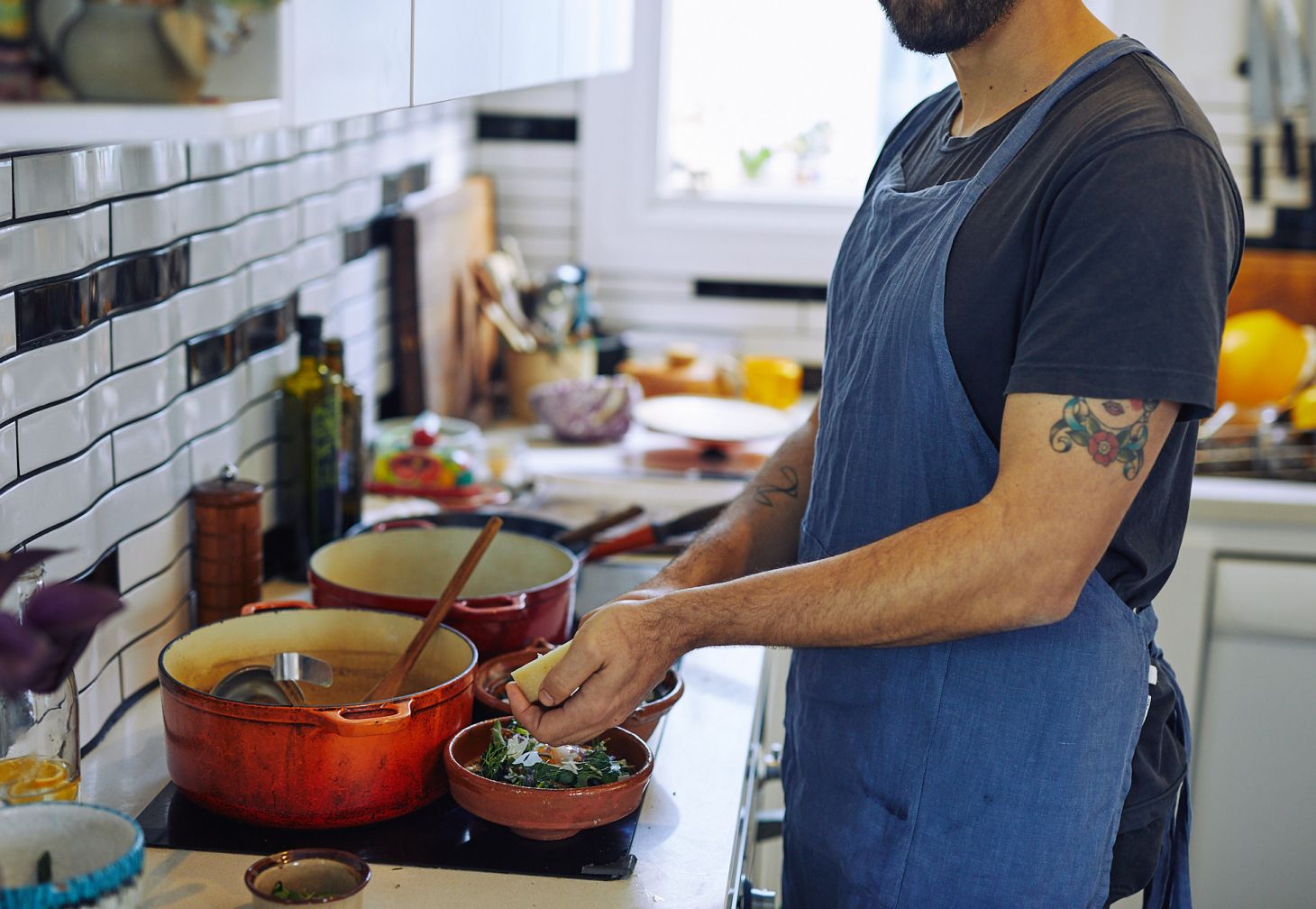 Cut garlic into thin strips and fry in olive oil over medium heat until nicely browned (approximately 1-2minutes). Set aside.

Remove the stalks from the cavolo nero and cut into rough strips. Set aside.

Add the chicken stock into a stockpot. Bring the liquid to the boil.

Add pearl barley, season with salt and pepper, add rosemary leaves and flowers, and simmer for approximately 15 minutes or until the barley is cooked.

Add the cavolo nero, season with salt and pepper, and leave to simmer for five minutes.

Meanwhile, fry an egg for each person in olive oil over medium to high heat (This way the egg should brown on the bottom, crisp up on the edges and have a soft yolk).

Add the peas to the broth and gently simmer for one minute.

Divide the broth among bowls and top each dish with a fried egg and fried garlic. Add baby leaves, herbs and flowers as desired.

Rain some Parmigiano-Reggiano over the bowls and serve. 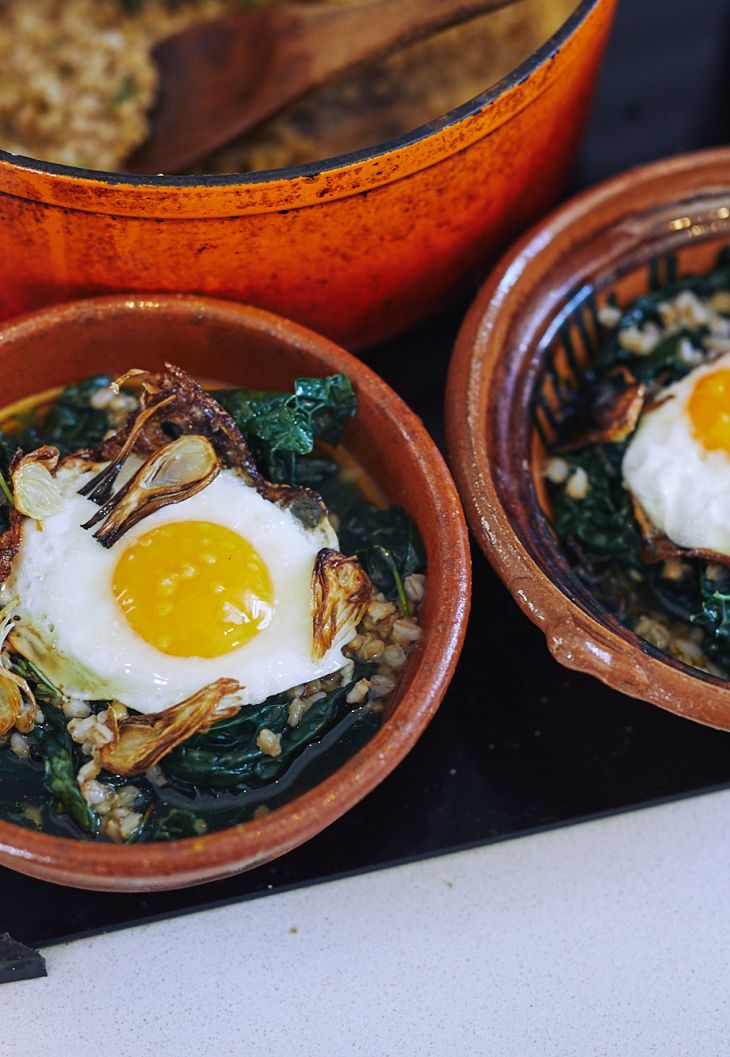 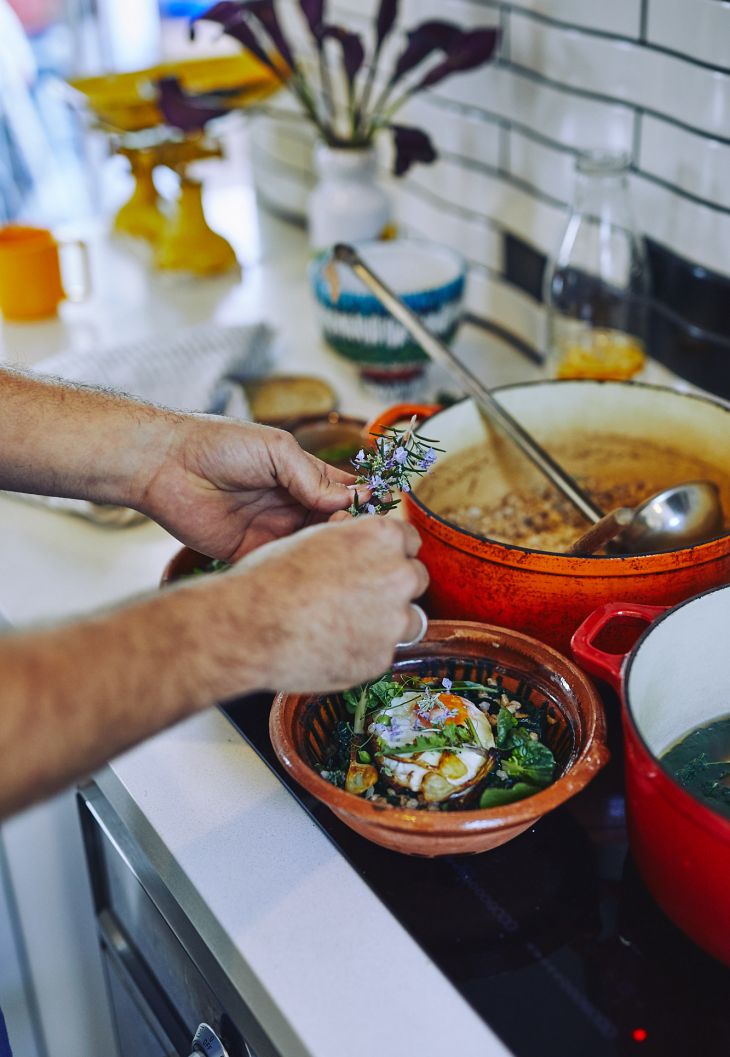 We visit the exuberant Culver City home of Annie, Jonathan and Pip Zawada.