Matt Lennon is the Brand Manager of two Sydney venues we find ourselves at frequently; Golden Age Cinema & Bar and Paramount Recreation Club, where he directs a number of seasonal and ongoing projects. He lives in a spacious apartment in Potts Point, in a curvilinear post-war building designed by Crimean architect, Aaron Bolot in 1948. Before he could move in there, Matt had to be interviewed by the board of residents. 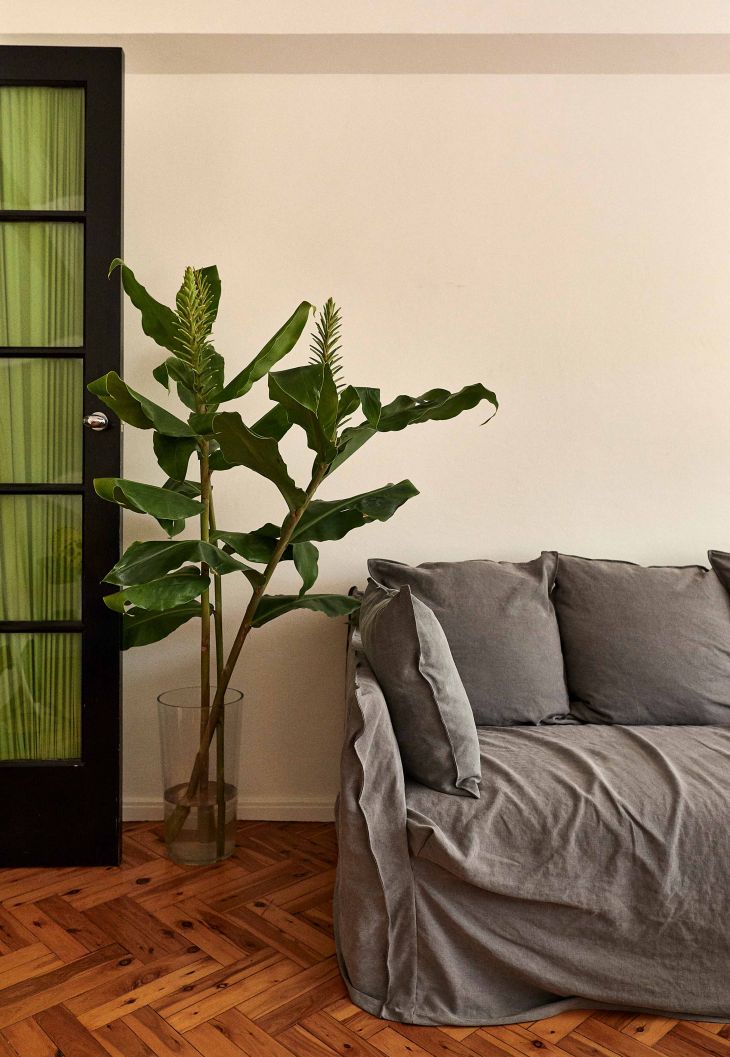 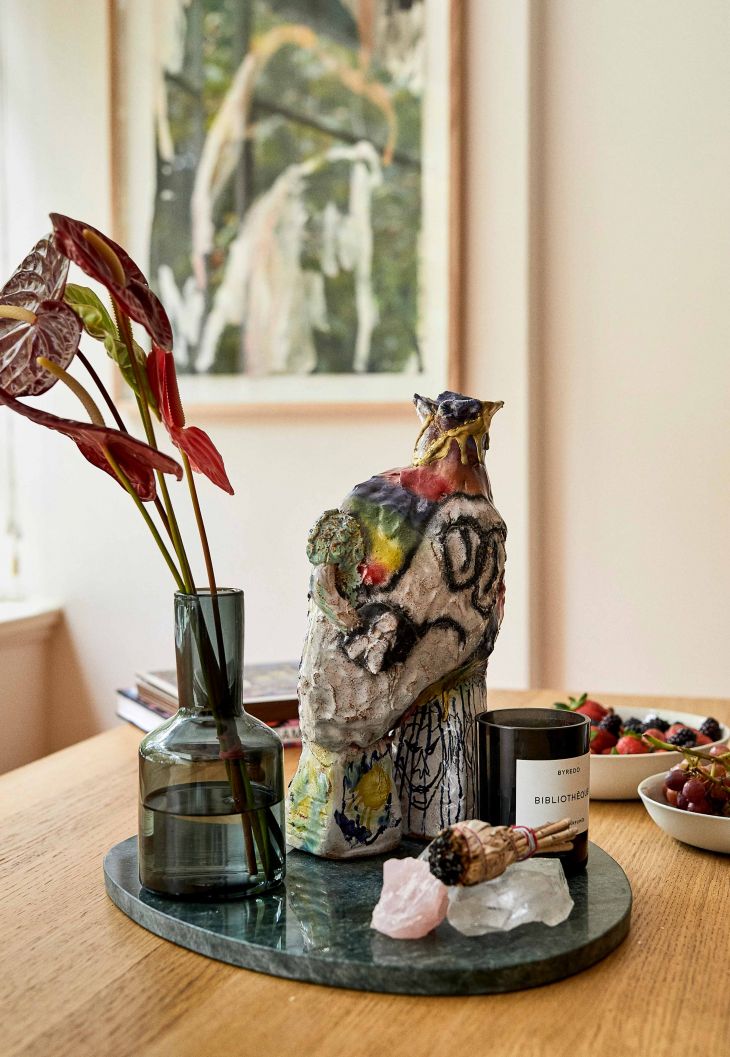 "The residents are a colourful bunch to say the least. When I first moved into the building I was summoned to an 'interview with the board' in one of the top floor apartments. I immediately wondered if this was going to be a 'Rosemary's Baby' situation and if so was I Mia Farrow or John Cassavetes? It turned out the interview was a very informal get together with some of the long-standing owners and involved lots of wine and no ritual sacrifice, praise be!" Matt explains that some of Bolot's early work was in cinema design where he worked on projects like the Randwick Ritz and Brisbane Regent Theatre. "I think his eye for the cinematic flowed into his residential work or at least into the lobby of our building which resembles something out of a dream sequence in Twin Peaks." 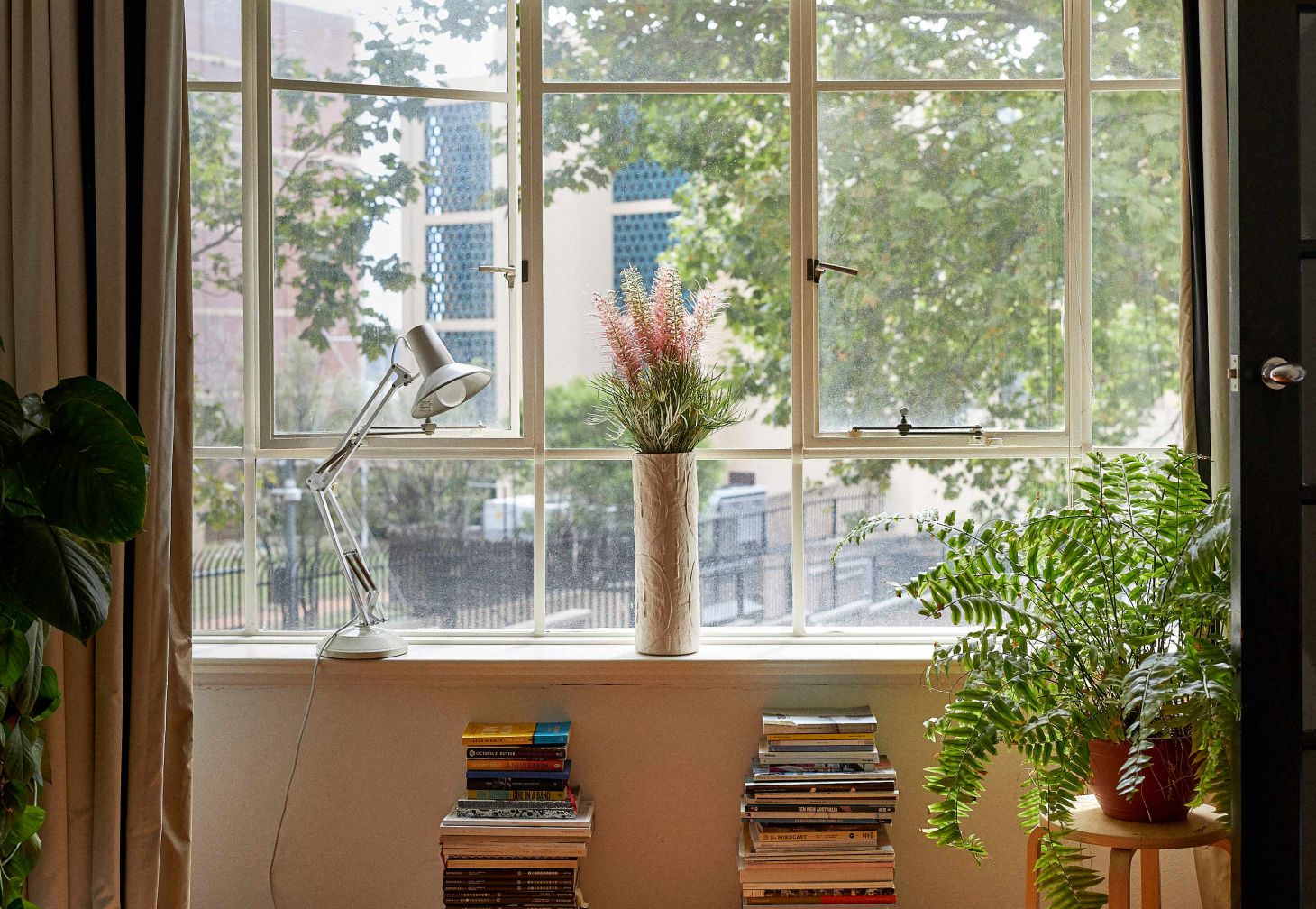 The floor plan of Matt's apartment is designed for spaciousness and aspect. The kitchen and bathroom is positioned on the southern side of the building while the living and bedroom open to the north side, with an outlook framed by large glazed windows. 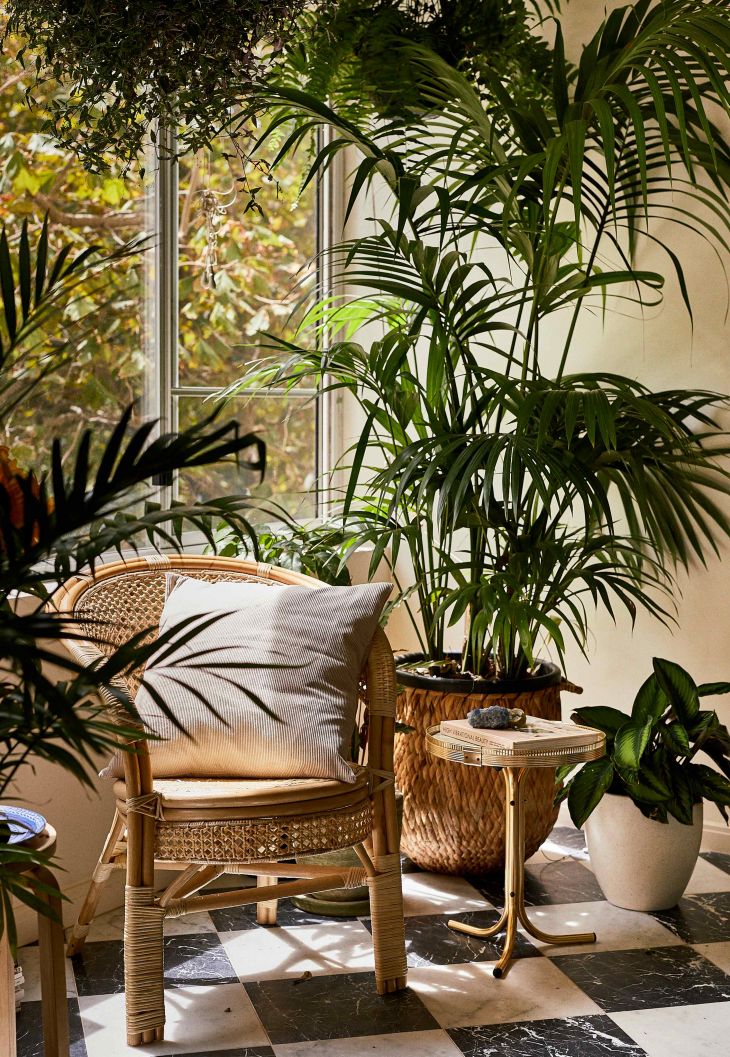 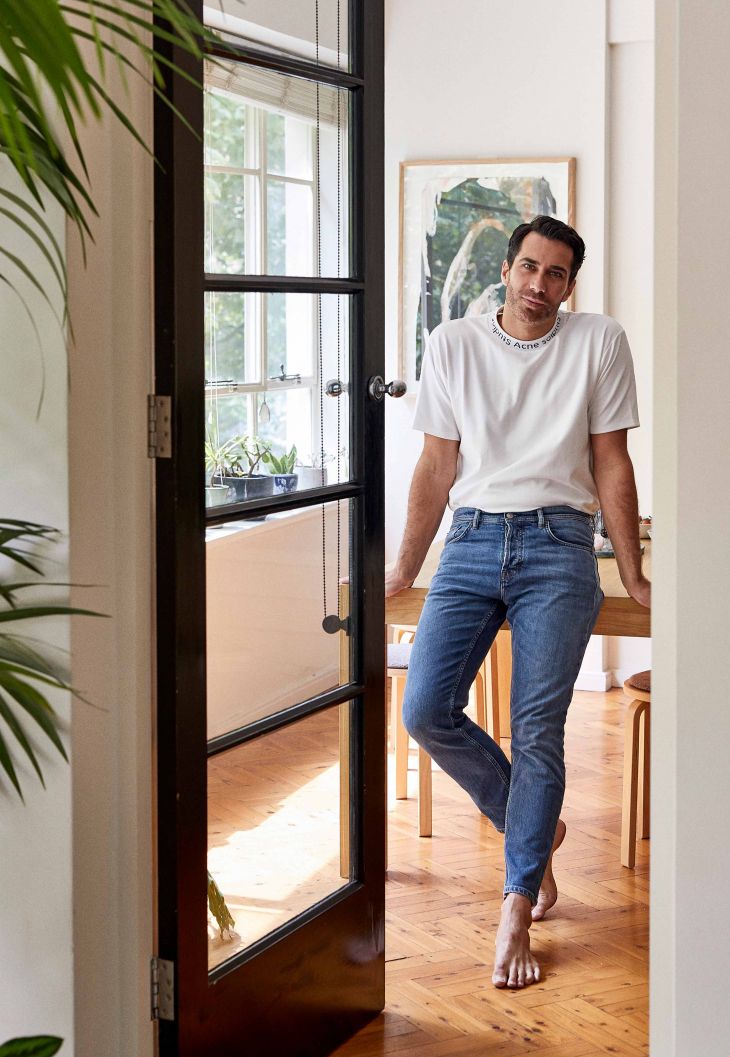 On Matt's chair sits an IN BED Organic cotton cushion in sand.

"I've been in this apartment for almost two years now after spending time working between Sydney and New York. Anyone who has lived between two places will know how displaced your stuff can get -- literally and figuratively. I spent more weekends than I care to remember taking things out of storage, sorting through boxes of books and trying to hang art. But, over the past few months I've made some adult purchases (like an MCM House sofa that I love and a small rainforest of plants) and it finally feels like the place is finally coming together."

Anyone who has lived between two places will know how displaced your stuff can get -- literally and figuratively. 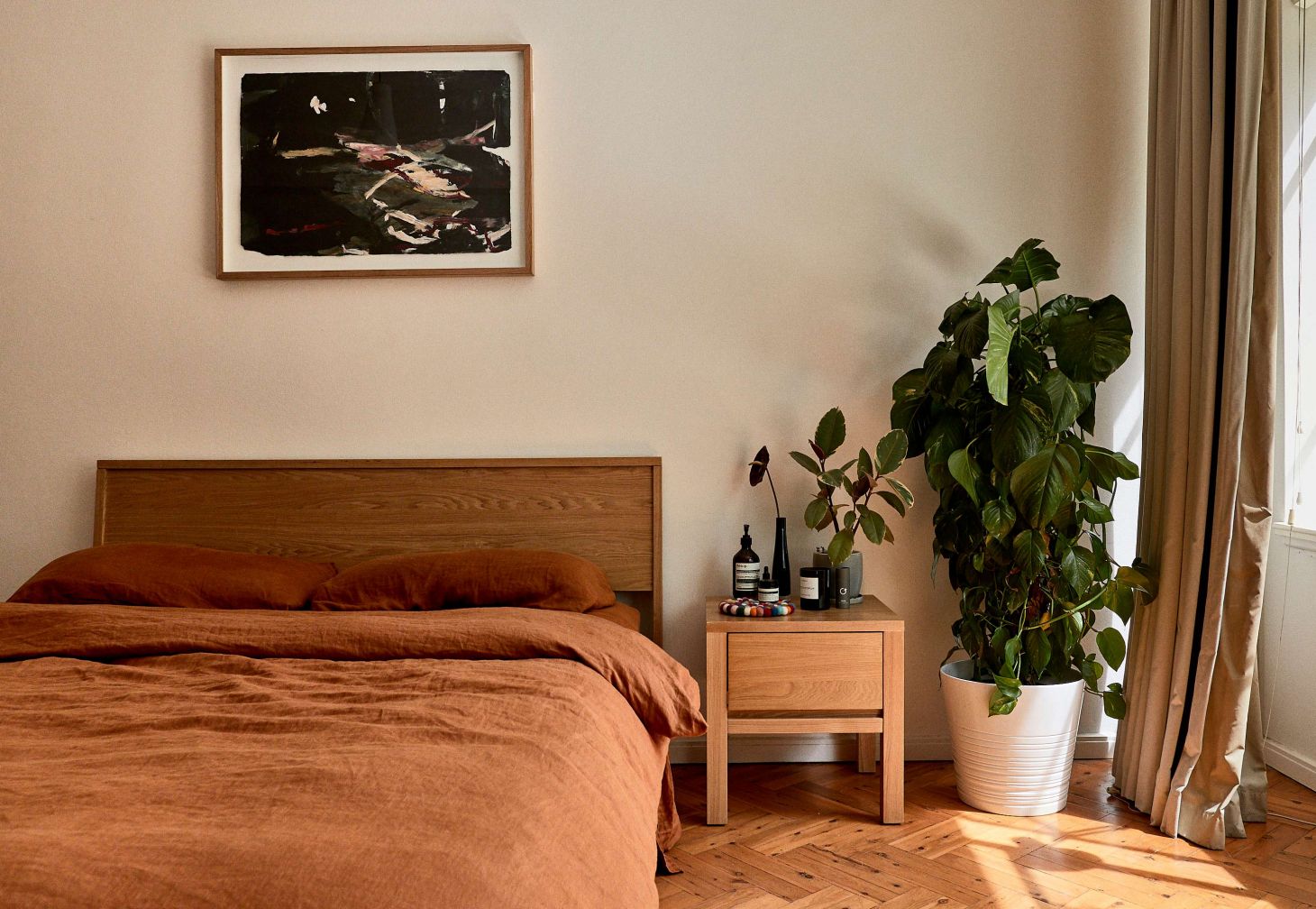 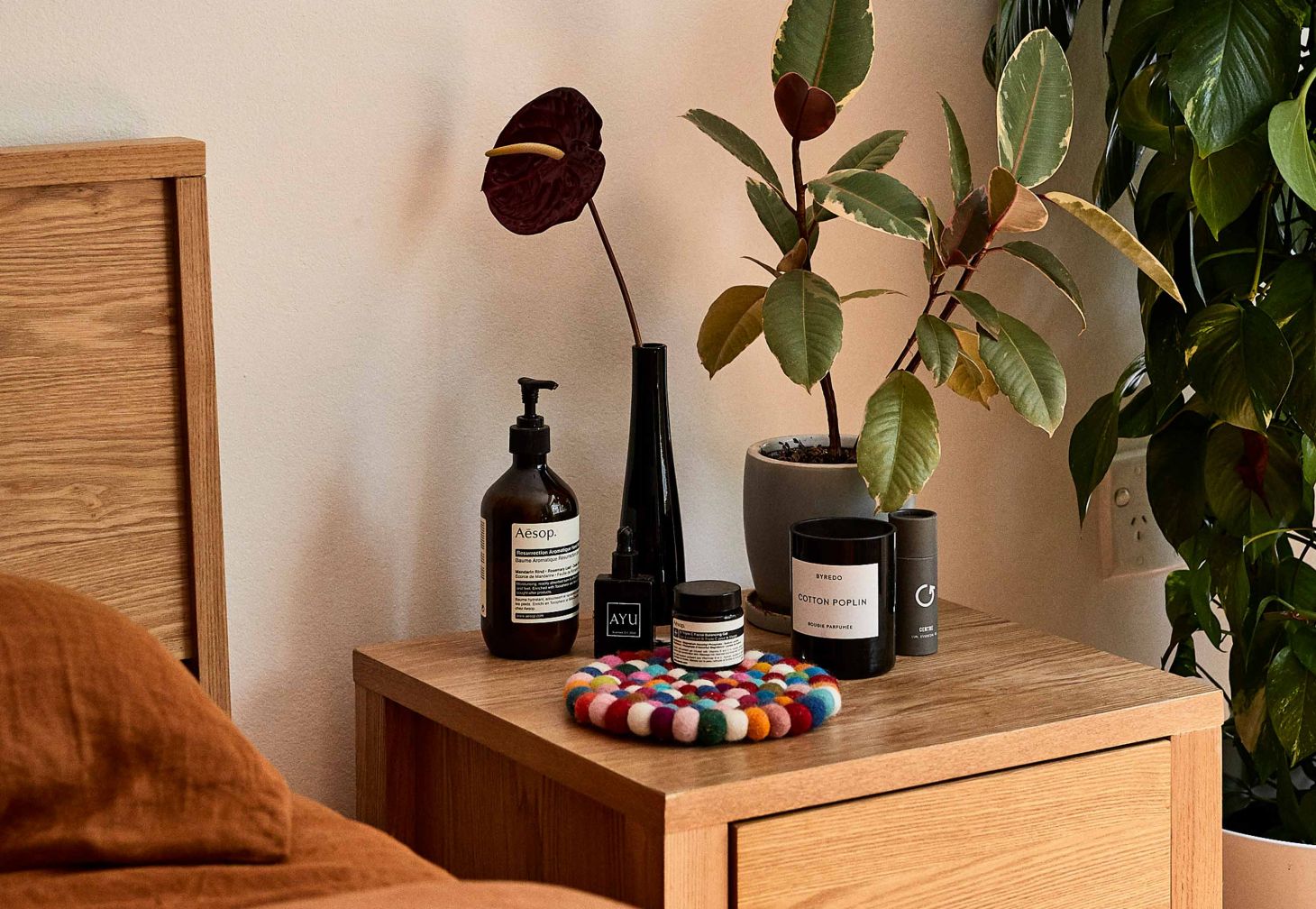 "There are a few pieces of art in the apartment that will hopefully have more friends soon; two works by Antonia Mrljak from Becker & Minty and a sculpture by Ryan Hancock in the lounge, as well as a piece by my friend and talented photographer Bart Celestino in the sun room. The rest are vintage that I've picked up over the years." 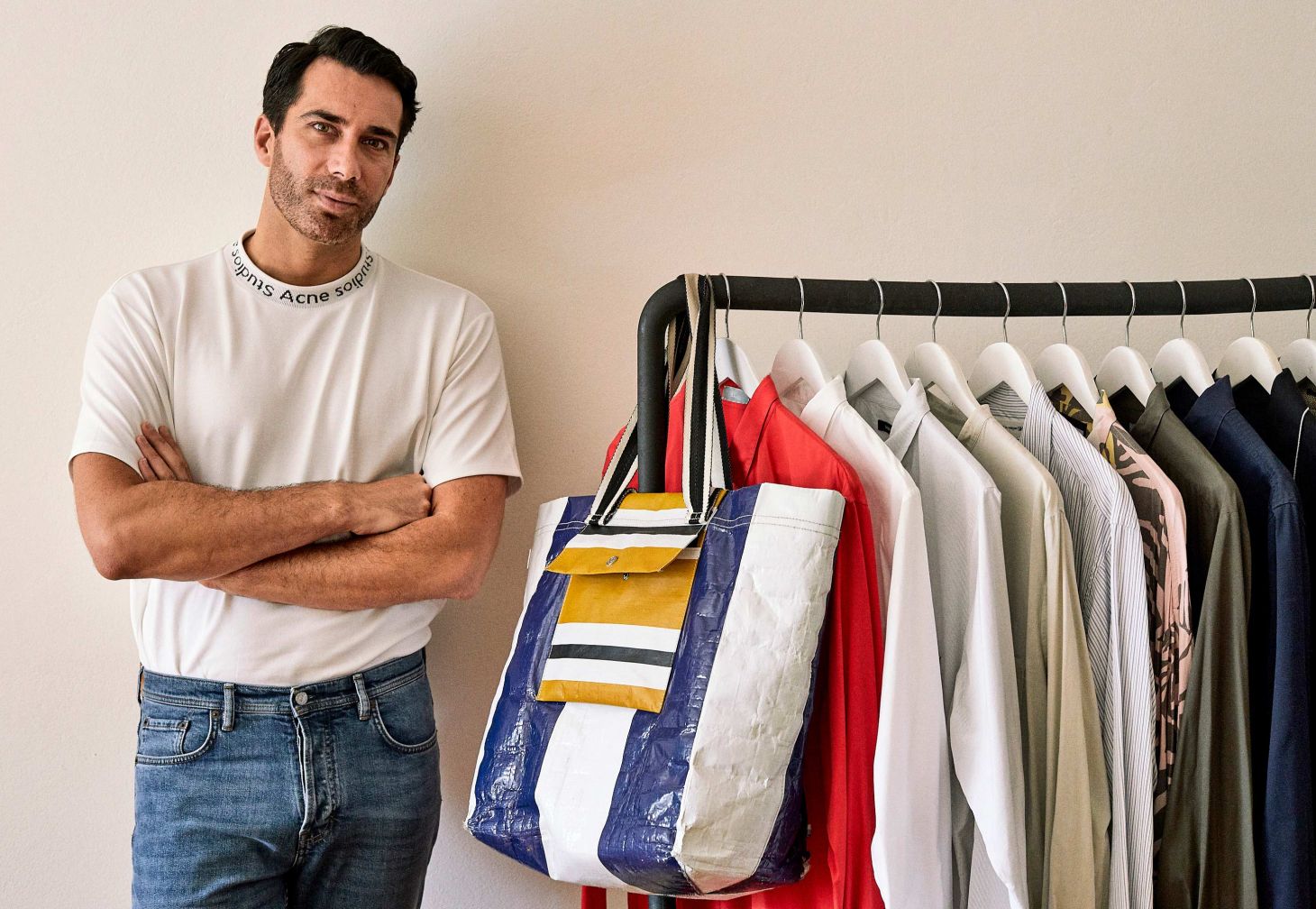 Matt shows us his wardrobe collection, pieces mostly from brands he has worked for in the past; bassike, Dion Lee, A.P.C. and his favourite Australian retailer, Incu. 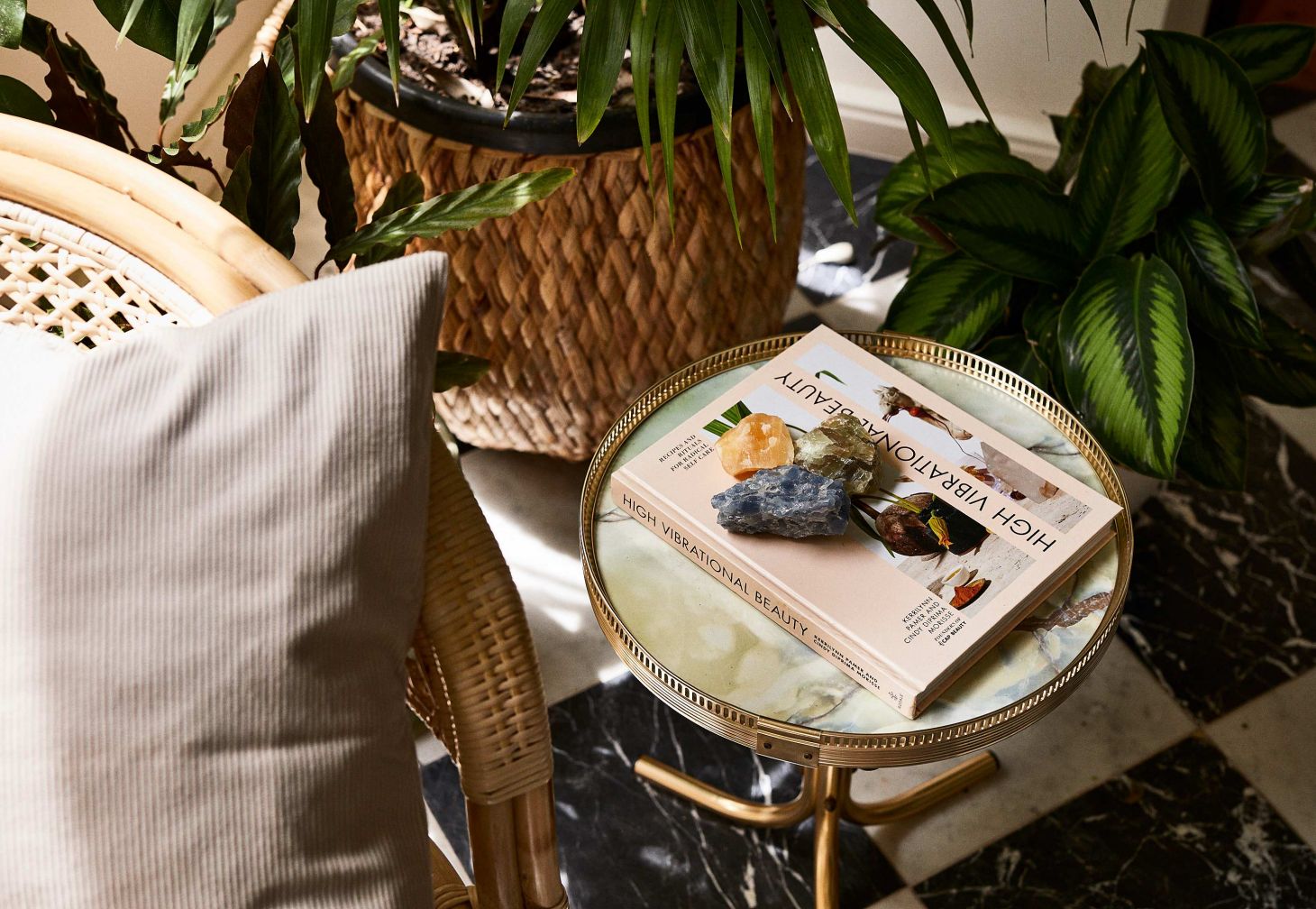 "One of my favourite books in my collection is 'High Vibrational Beauty' and it was gifted to me by a colleague at work. He gave it to me partially as a joke (because some of the rituals and treatments might seem a bit outlandish), but hilariously, I don't think I've ever felt so seen. It's full of naturopathic tips for healthy living and yes it's a bit 'hippy-dippy' but the photography and art-direction are beautiful"

After all, isn't everything just energy? 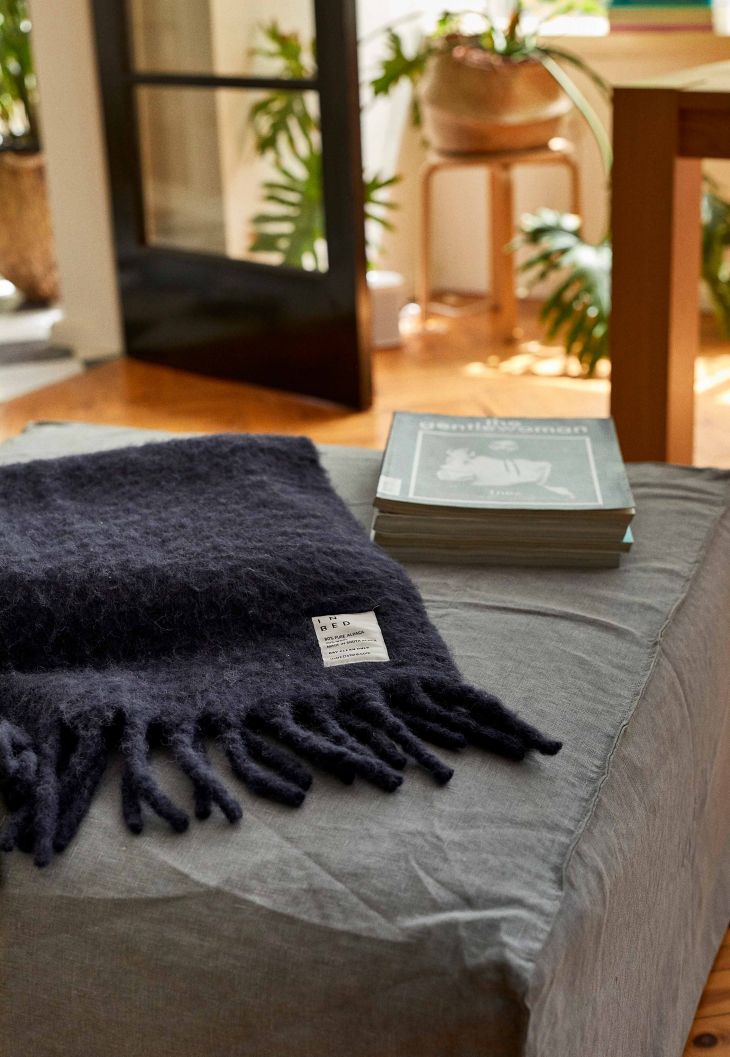 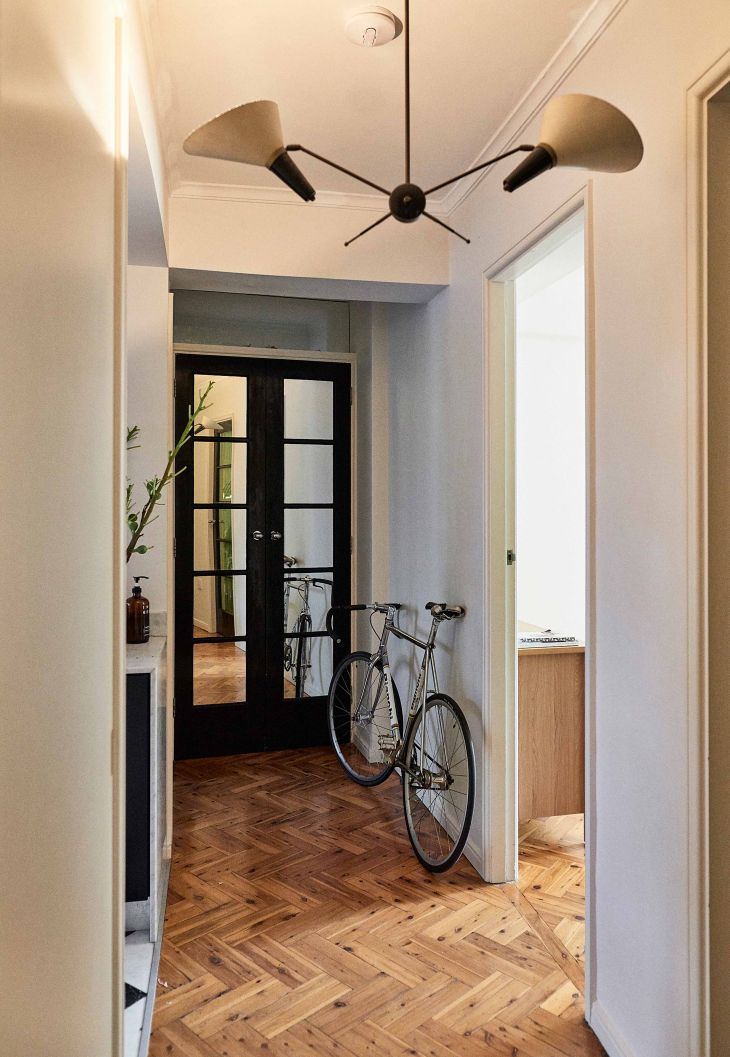 An IN BED alpaca throw in navy, carefully folded on Matt's ottoman.

"I think my bike has been with me longer than any of my other possessions; almost 10 years! It's a Bianchi Pista that I bought when I lived in Melbourne - it's travelled to Europe and the U.S. with me and is horribly impractical to ride in Sydney given that it's a fixed gear, but it gets me to and from work most days just fine." 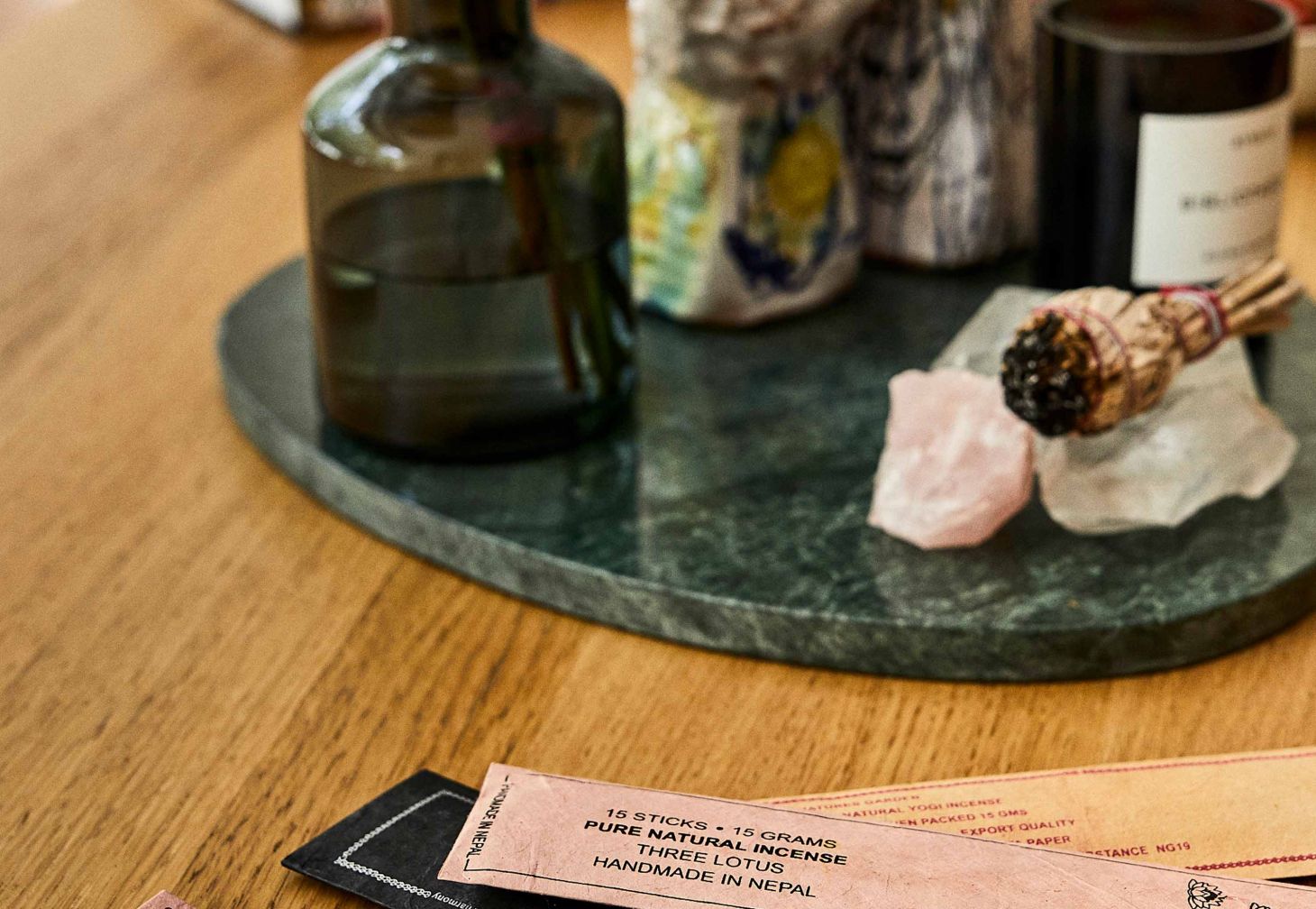 "I've always loved the outdoors, hiking, and adventure in general -- I think it's the Kiwi in me. Nepal as a destination had been in the back of my mind for a while; an artist friend had visited a few years ago and their body of work from the Annapurna region just looked so otherworldly. Being from New Zealand, I guess Sir Edmund Hillary's connection to the Himalayas and the Nepalese people had always resonated with me as a kid too. I visited over the New Year holidays. My family were not impressed that I wasn't coming home for Christmas and my friends couldn't believe I was swapping peak Sydney summer for snowy peaks and -24 degree temperatures. I guess I saw it as a time to shake off the year, challenge myself, and really just see something completely new. So for two weeks it was just my guide, Udip and I walking for 5-7 hours a day, culminating in the crossing of Thorong La, the highest navigable pass in the world at 5416m. It was one of the most wonderfully introspective and culturally rich experiences I've ever had. It was also the longest I've ever been without showering. After the trek I flew back to Kathmandu aboard a tiny plane, had the longest shower of my life and spent a couple of days exploring the local markets. I picked up, among other things, enough crystals to have customs pull me aside for an hour, a Yak hair rug, and a selection of beautiful Nepalese incense for friends back home." 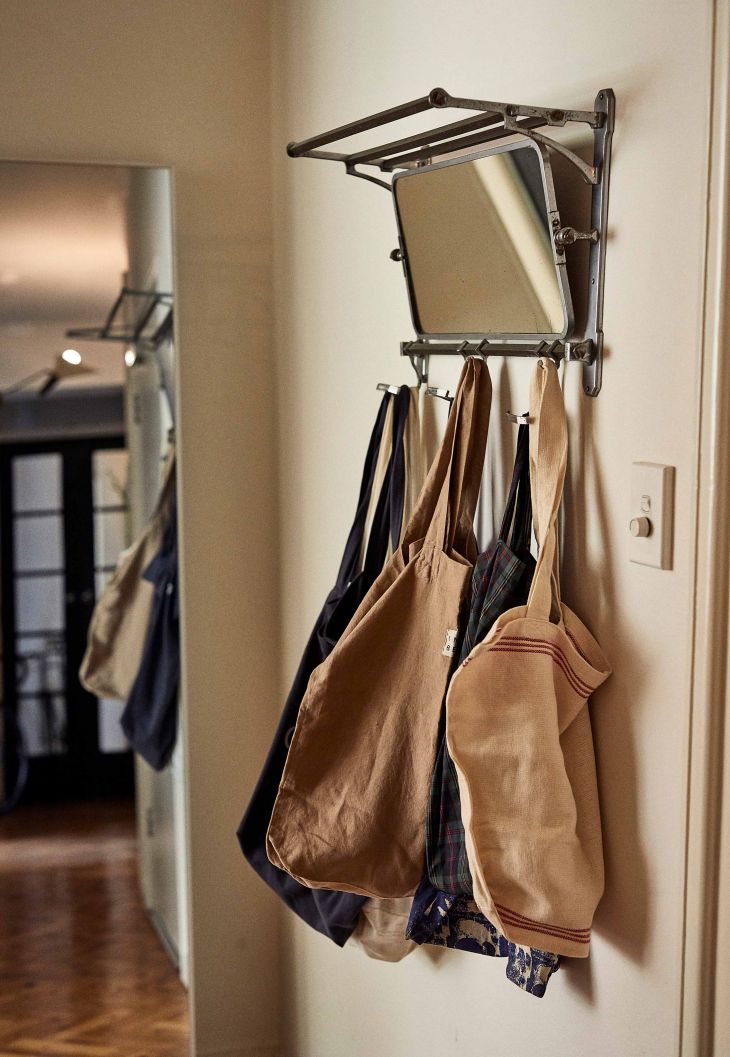 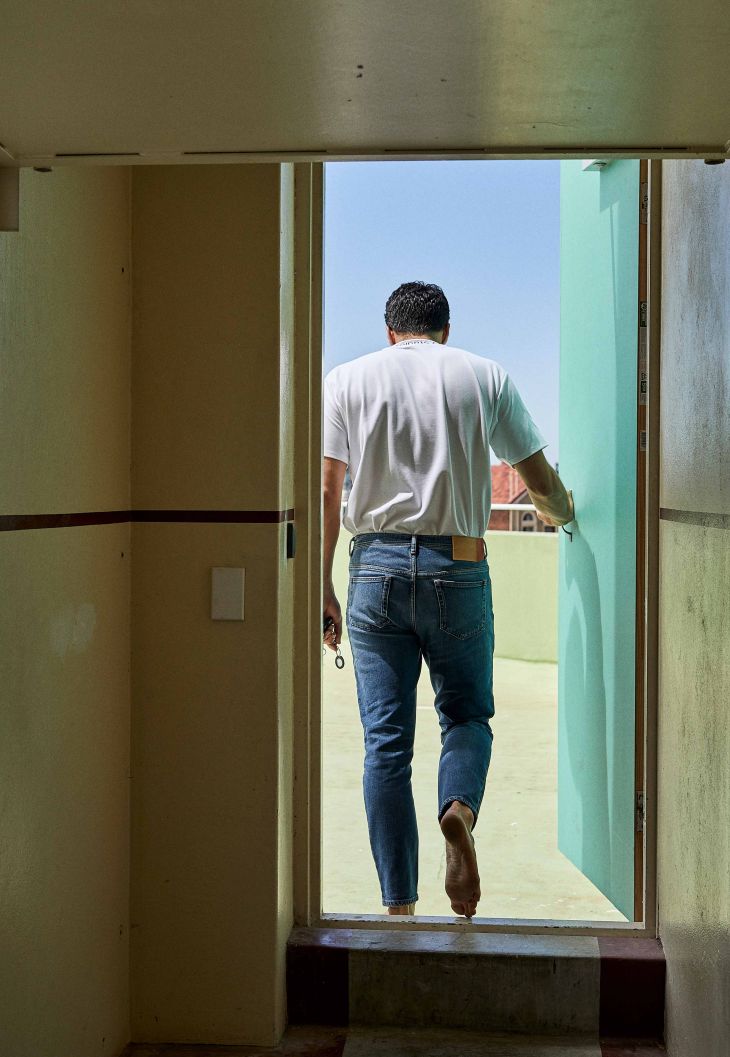 We took the original, art-deco lift to a rooftop terrace with an impressive outlook over Sydney harbour. "I'm lucky to have some of my closest friends within a few blocks (one literally lives next door), so there's always plenty of home-cooked dinners and occasionally late night dancing on the roof." @matthew_lennon_