Darren Robertson is a chef and co-owner of of Sydney's Three Blue Ducks as well as The Farm in Byron Bay. He opened his most recent venue, Locura, in Byron Bay in late 2018, alongside Chefs and co-owners, Andy Allen, Mark LaBrooy, Chris Sorrell, Sam Reid and Jeff Bennett. 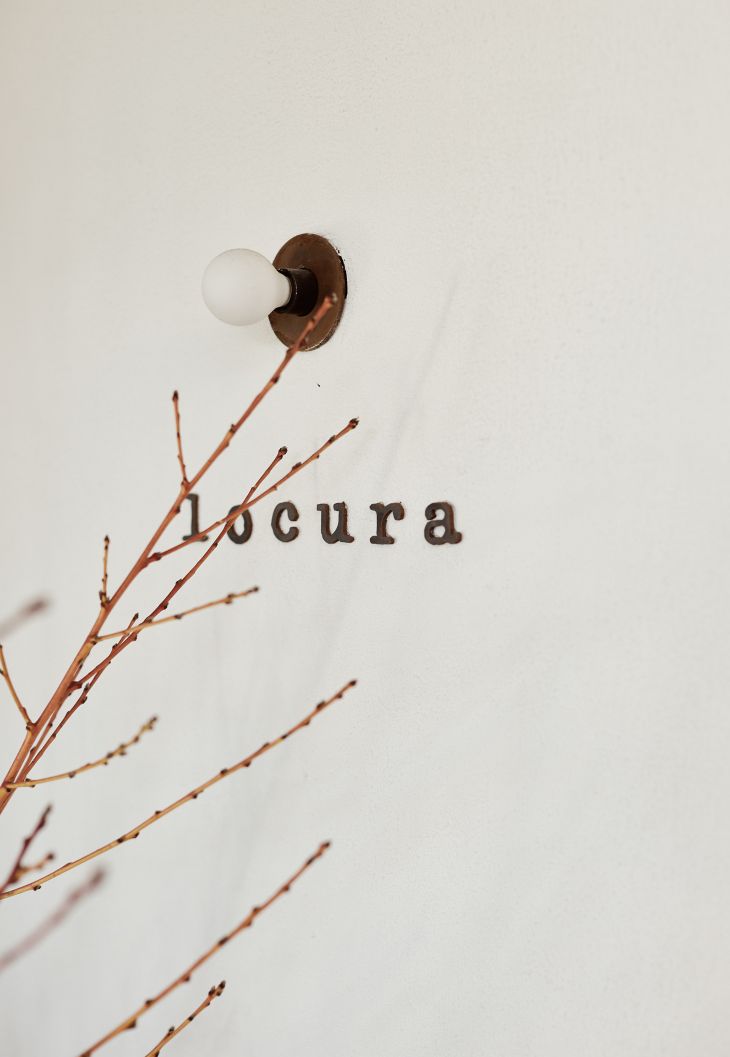 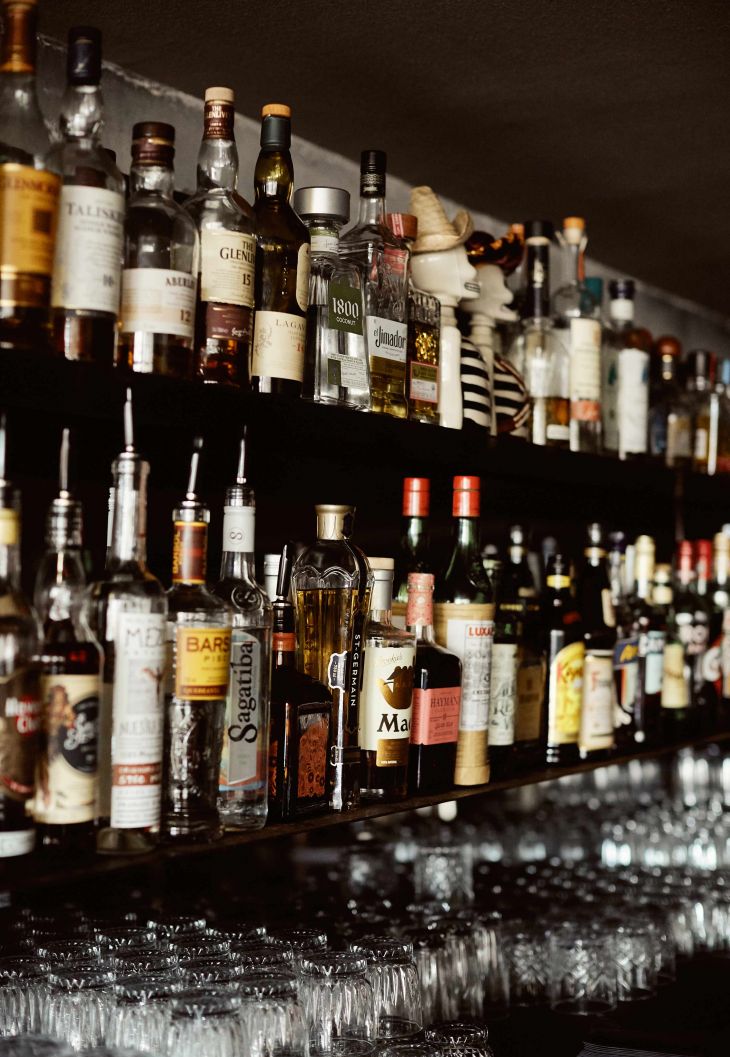 Locura means "madness" in Spanish, and the intention was to create a late-night bar that fostered good times, with Latin American inspired dishes on offer. 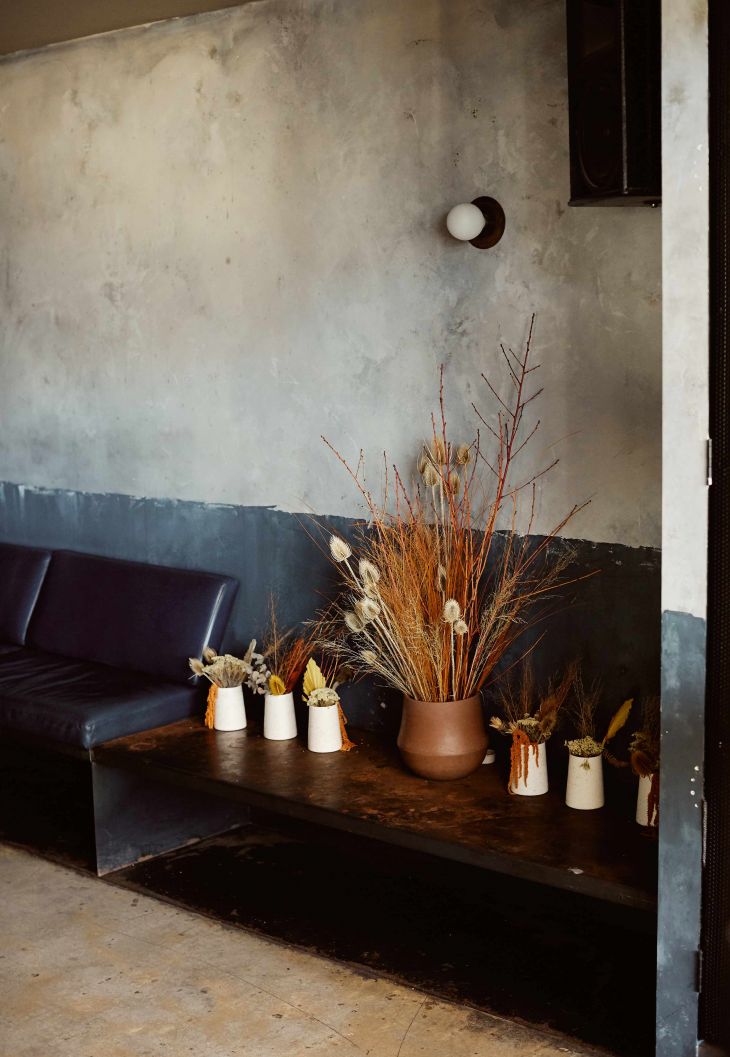 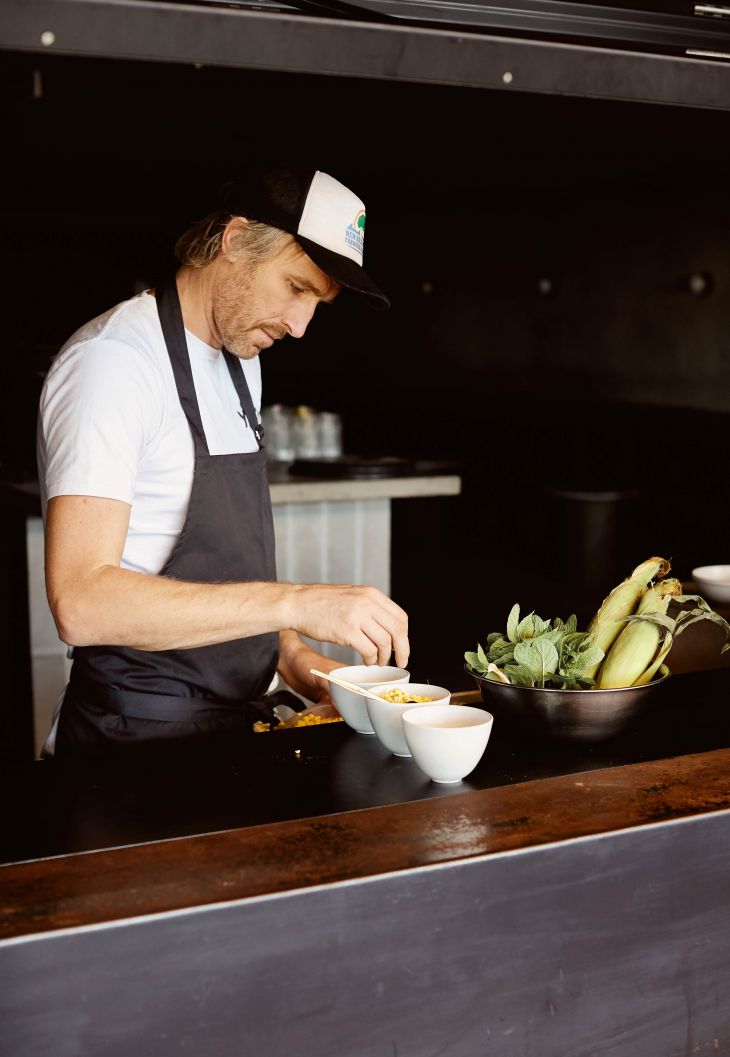 "Our friends from Pattern Studio designed the space. We wanted something with a different feel to our other restaurants. Somewhere with an open space you could visit in the early evening for sunset drinks, tacos and ceviche, that would evolve into a late night bar with music and somewhere to have fun under the stars later on."

Somewhere with an open space you could visit in the early evening for sunset drinks, tacos and ceviche, that would evolve into a late night bar with music and somewhere to have fun under the stars later on. 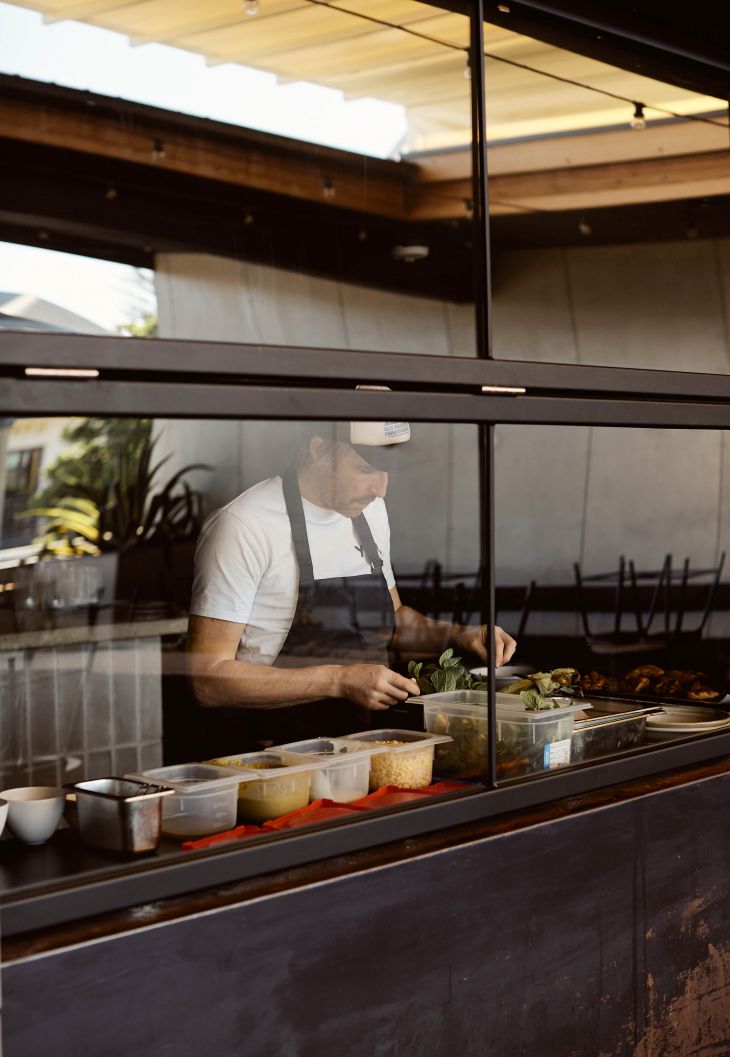 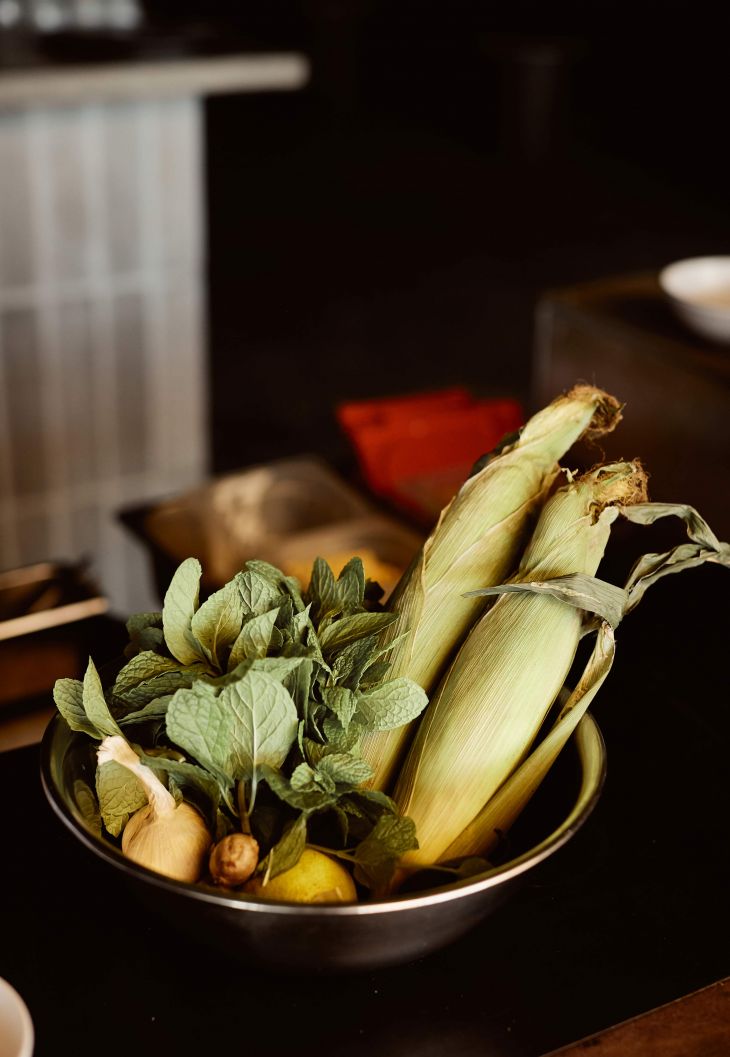 "It's been a few years in the making. We really wanted to run bar in Byron for locals, visitors and one that would allow us to continue serving people from the Three Blue Duck restaurant down the road. Between the six of us we already had trips to Peru, La and Mexico lined up. This inspired the food and drinks." 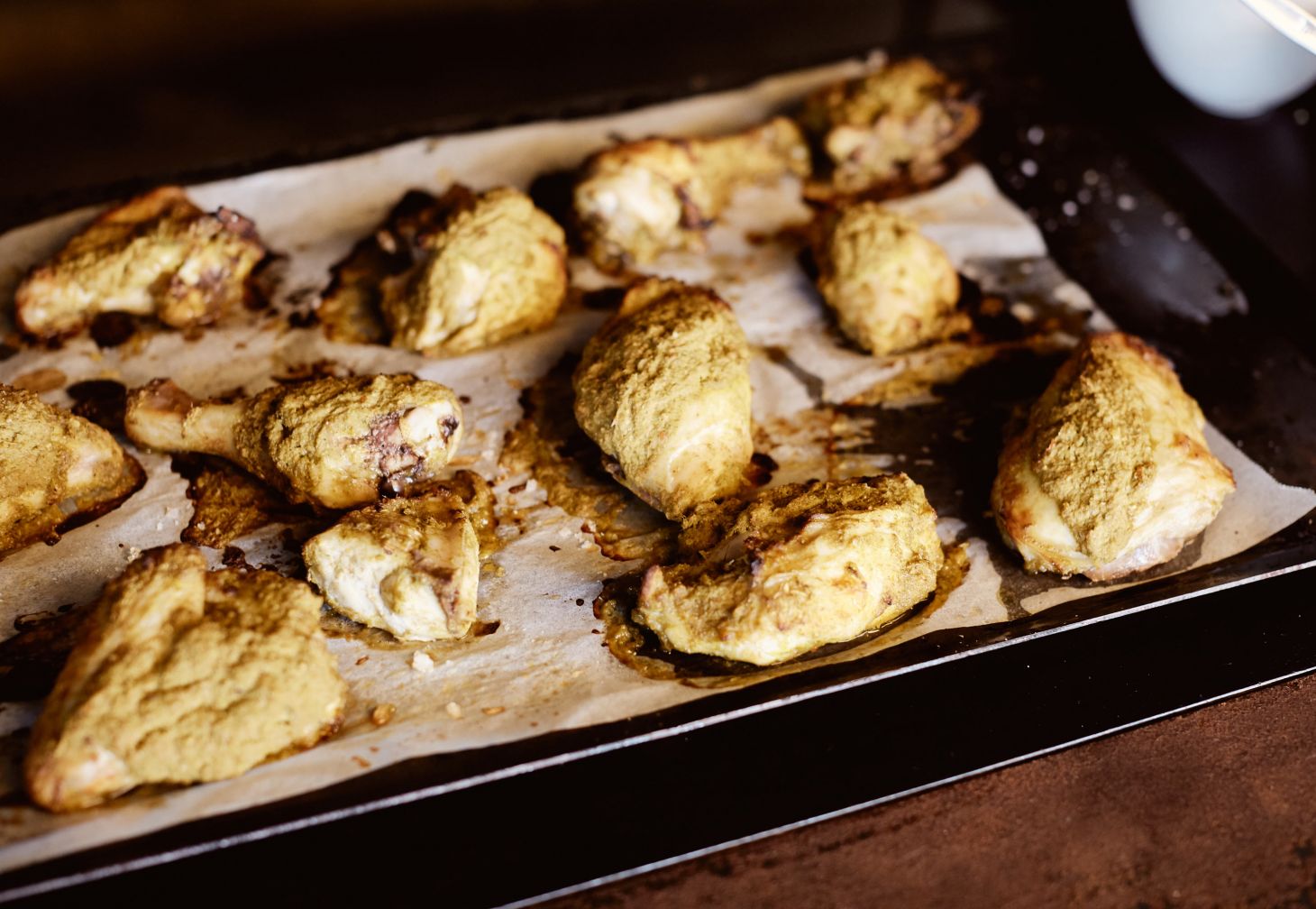 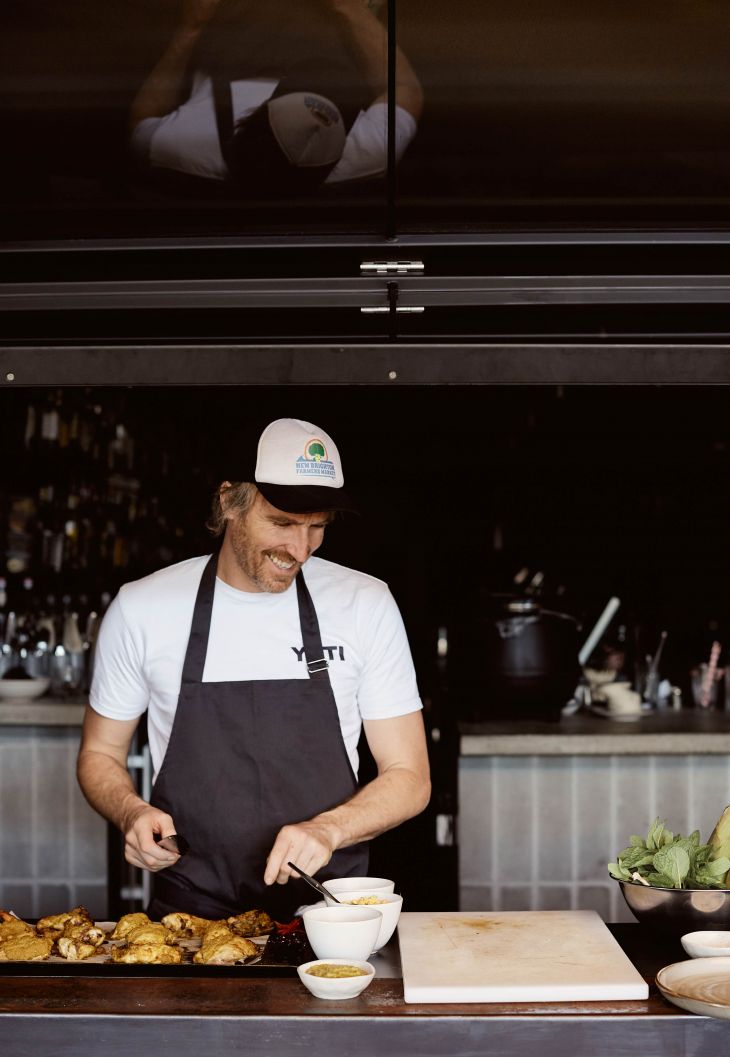 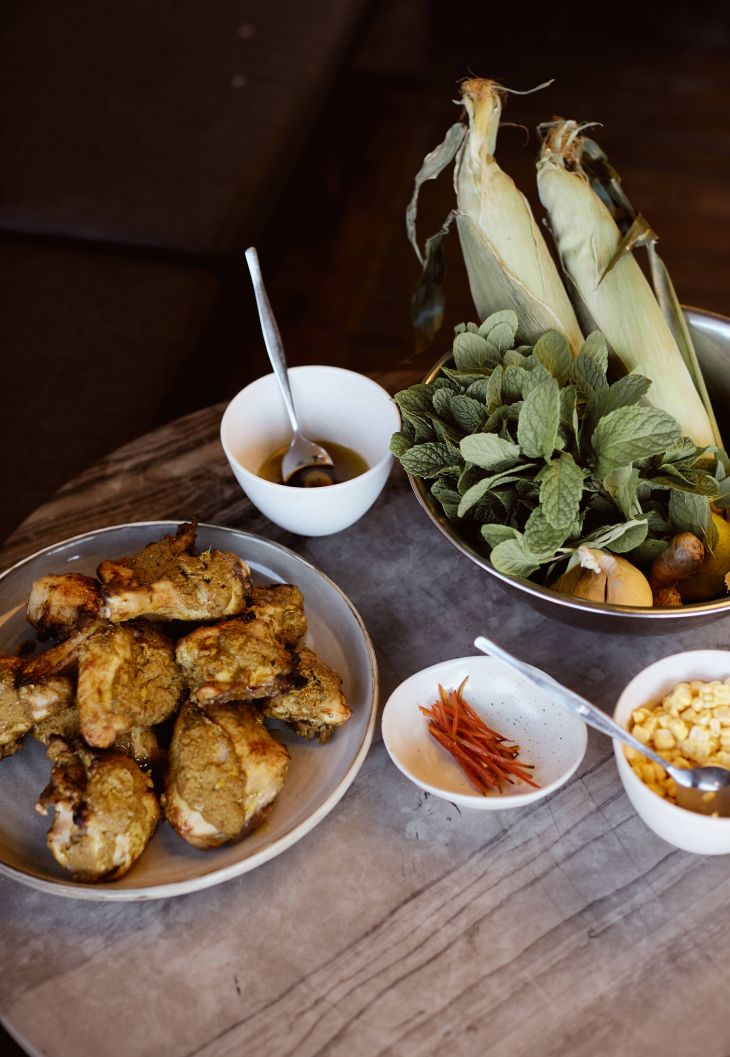 "This is a typical dish from our Locura feasting menu. It is a whole pasture raised chook, marinated with loads of spices, herbs and citrus. We roast it up, then chop up into pieces. This is served with corn, fresh chilli and lime. We typically use us all our herb stalks in marinades like this, despite often being discarded still contain loads of flavour and nutrients."

We typically use us all our herb stalks in marinades like this, despite often being discarded still contain loads of flavour and nutrients. 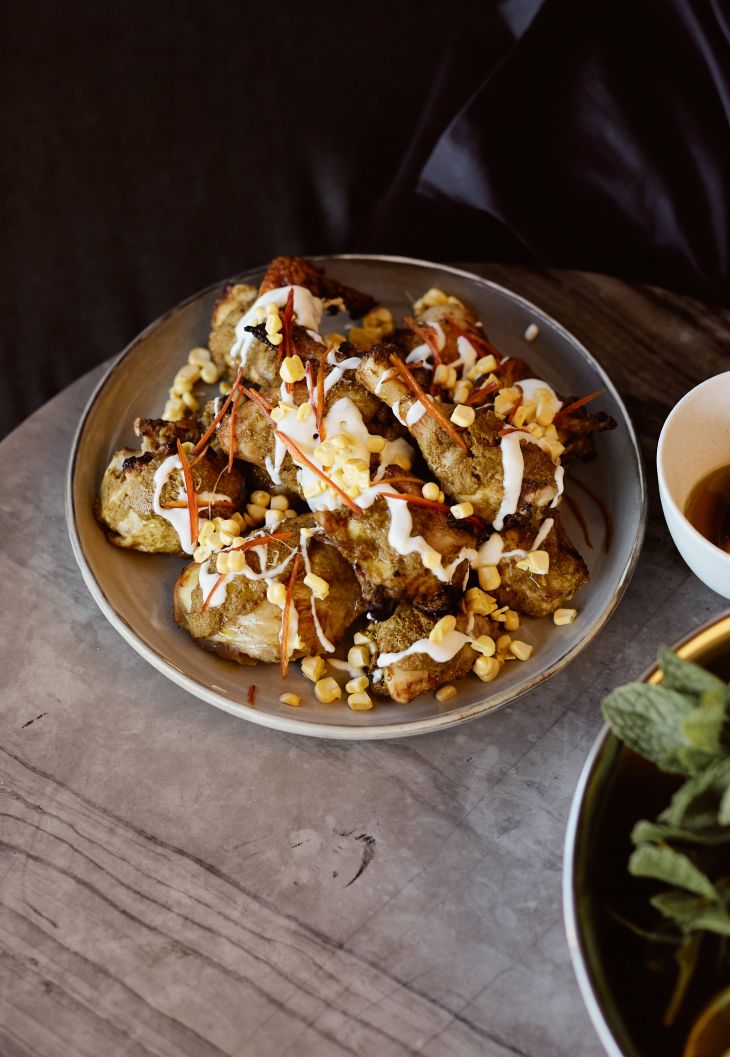 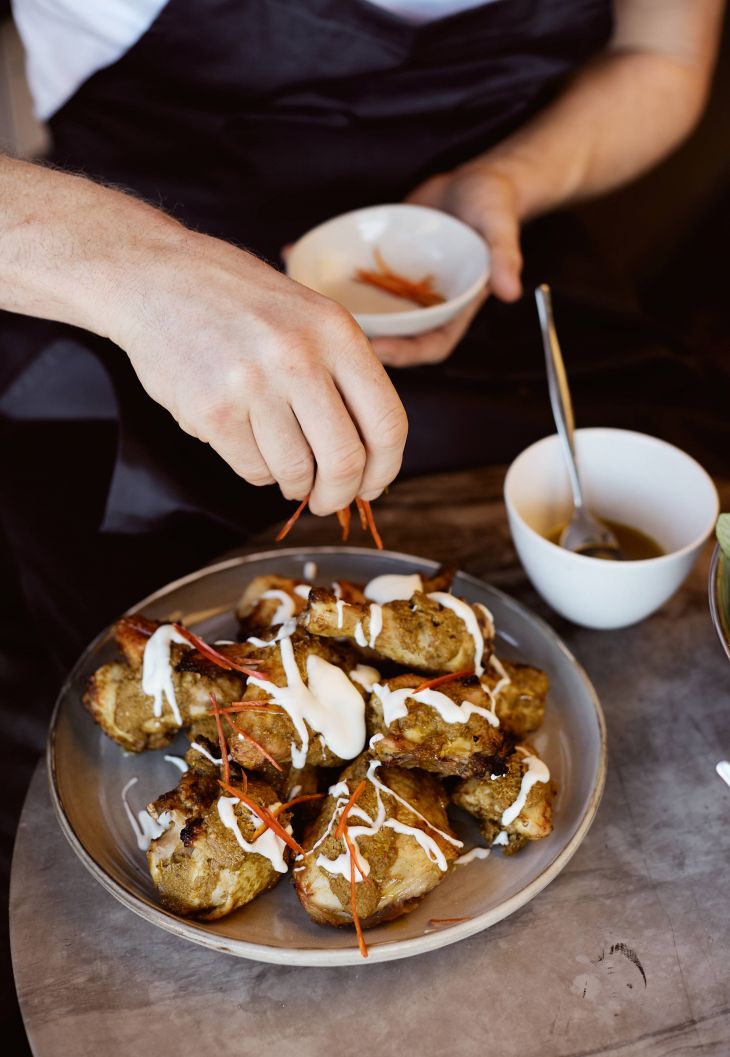 "The chickens are from Brooklet Springs, they're pasture raised on the Farm pretty much ten minutes down the road, which incidentally is where our Three Blue Ducks restaurant is located." 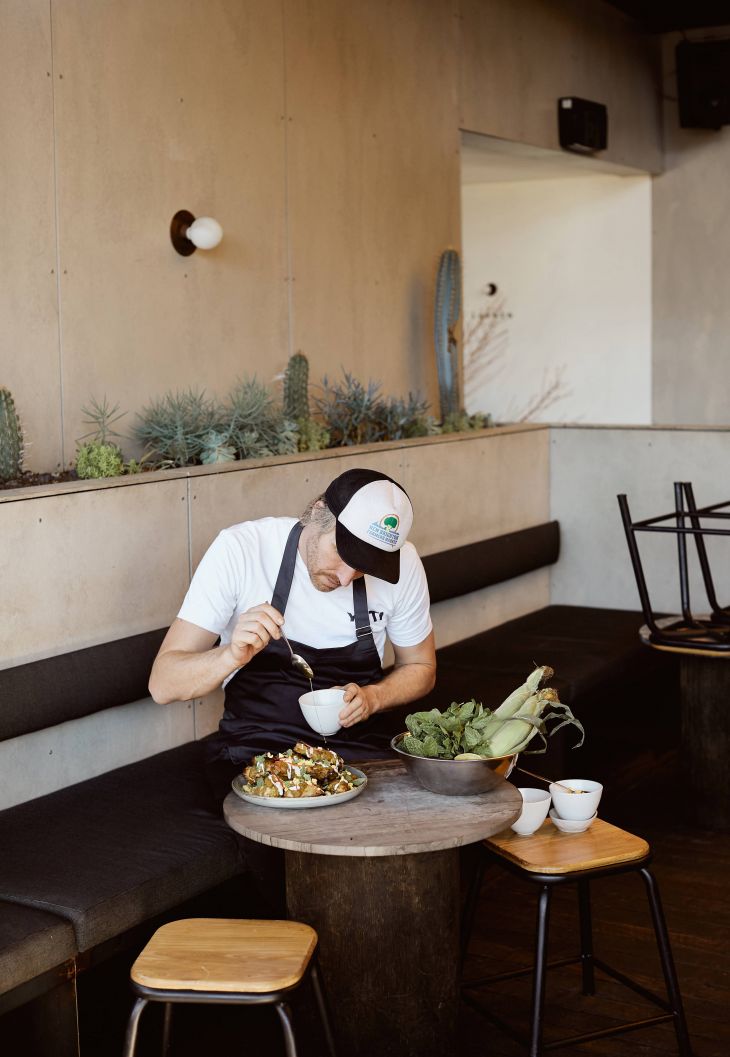 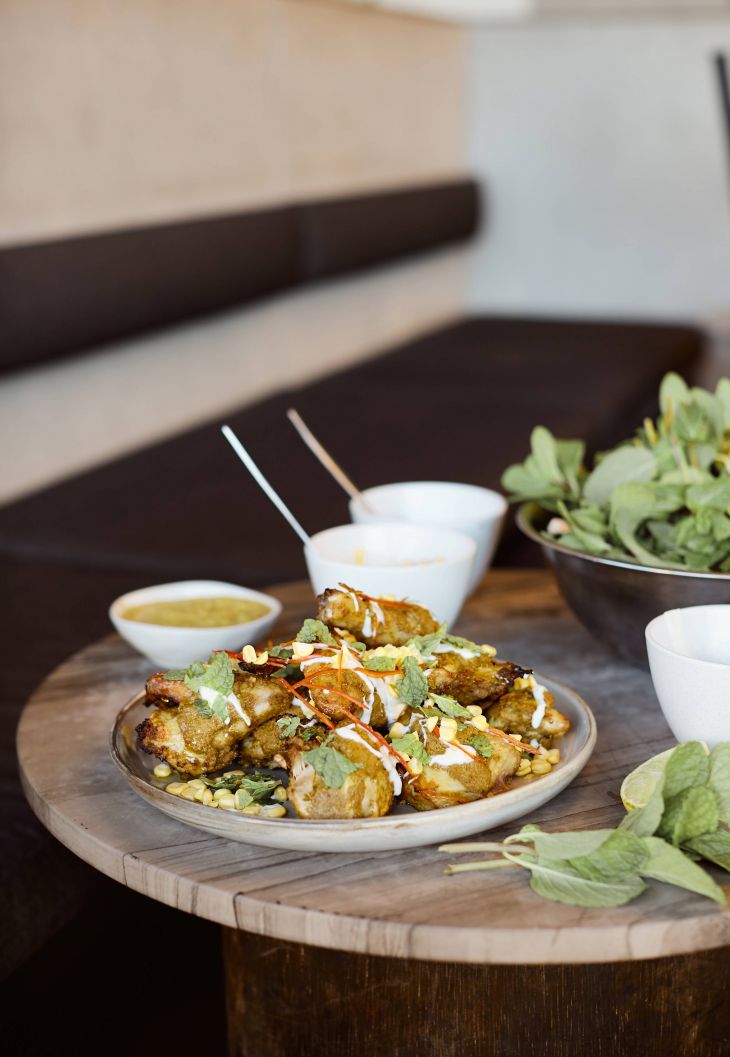 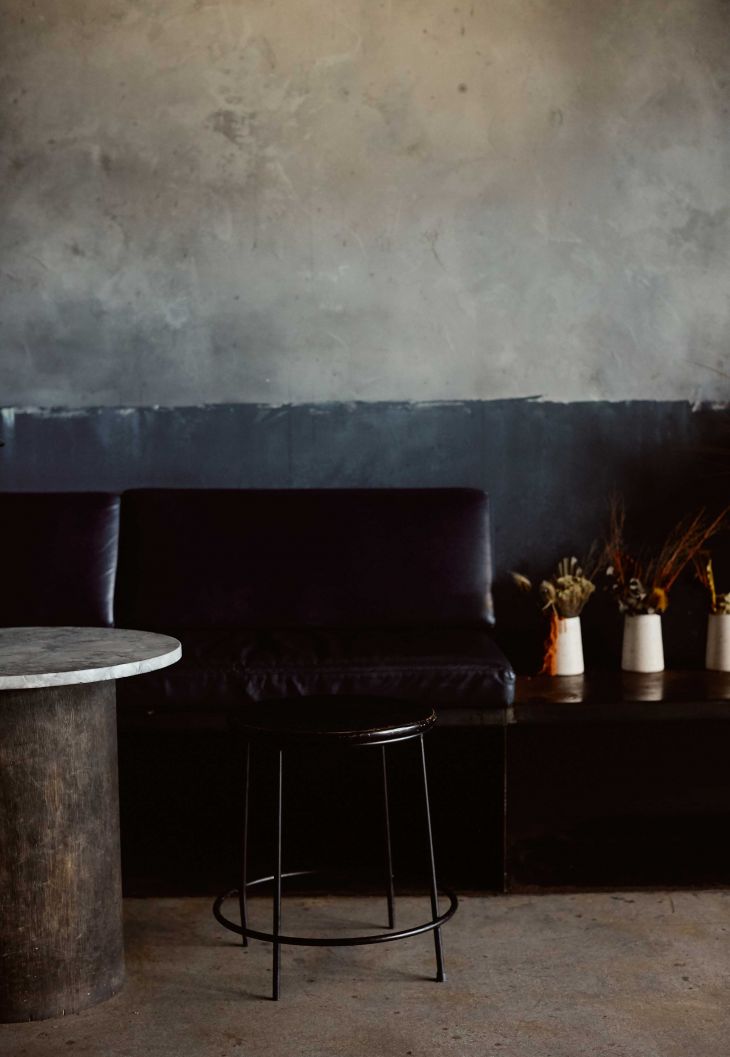 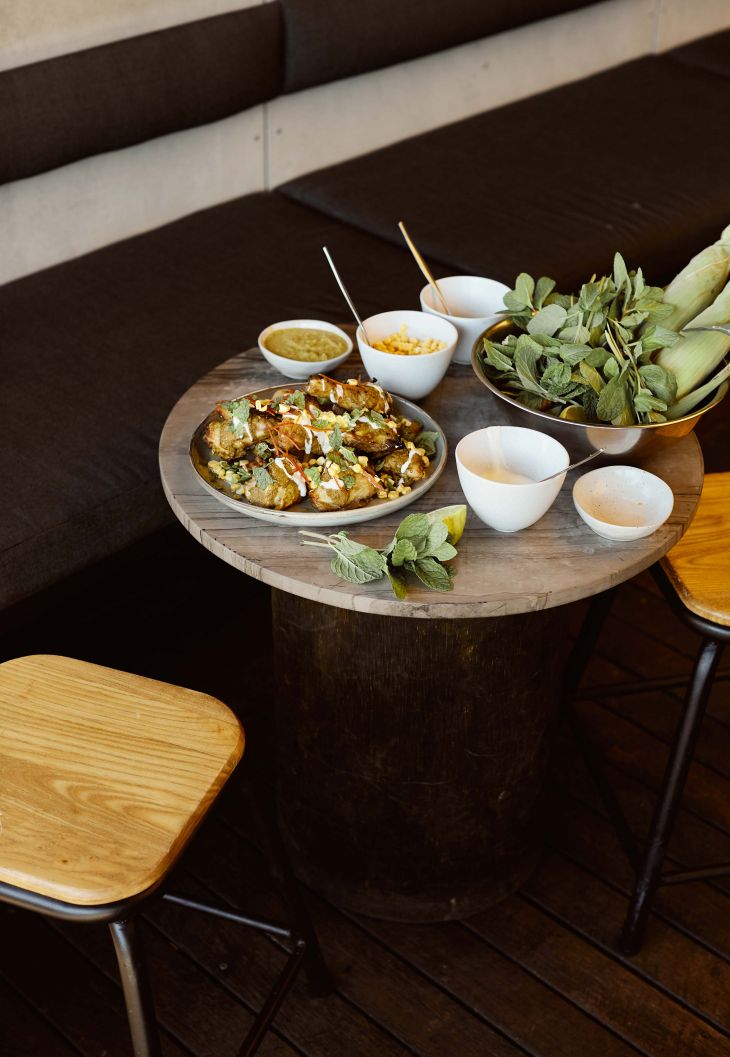 Crank the oven to 190 degrees. To prepare the chicken you will need some poultry scissors or a sharp knife. Remove the back bone by cutting along each side. Lay the chicken flat and cut down the breast bone. Now you will have the two halves, cut these in half between the breast and leg meat and then cut each part into three.

Peel the garlic and ginger, de-stalk the chili, roughly chop the shallot and throw it all into a
blender along with all the other ingredients and blend to make a smooth paste.

Marinade the chicken and leave in the fridge for at least 20 minutes or overnight is the best to
get all the flavors inside. Transfer the chicken onto a paper lined baking tray and allow to
come to room temperature for about 20 minutes.

Roast the chicken for around 25-30 minutes. Once cooked, season with lime juice, a bit more
salt, yoghurt, corn, picked herbs and chilli before digging in.

“I’d have this with a cold beer, like one of our favourites Stone and Wood, Balter, Young Henry’s, Yulli’s or Green Beacon, or a glass of Jilly Lone Ranger Chardonnay.”

A warm house in Oaxaca, home to Caitlin and the dogs she cares for.

We visit a small, industrious home in the hills behind Los Angeles.